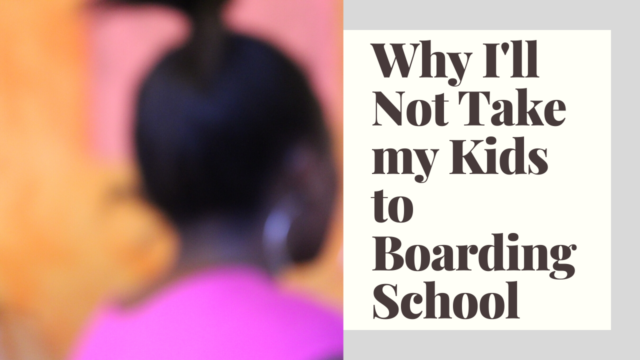 Today, I narrate the story of one mom’s reflection of how her being in a boarding primary school robbed her of something. She talks about her experiences and the lessons she drew from them, and her decision not to take her children to a boarding school.

By the way, in case you missed my previous post, you can catch up on it here: “Why I’m Feeling Resentful Towards my Husband”

“I remember my early childhood years very well. Right from kindergarten up to class three, I always the ‘default leader’ in the games that we played with my friends.

What I mean is that my peers would naturally look up to me to guide them in most of our activities.

“*Stephanie, tucheze game gani leo? Stephie, watu watu wangapi kwa team moja? Steph, tuende lunch saa ngapi? Stephie, should we choose color blue or green? Stephanie, what do you think about….” and other such questions. I always found myself giving an opinion on something, with my peers following my lead.

In school as well, the teacher would put me in charge of our class when she would step out briefly. She would tell me to ensure the class was quiet and write down the names of noisemakers. Teachers would ask me to be their helper and would also send me to the staff room or to deliver messages to other teachers. I was quite responsible in what I did.

My mom too noticed my leadership qualities and said as much.

“Stephanie, you’ll be a good leader someday,” she told me once when I was in class three. I never forgot those words.

Maybe it was because I was a first-born. I was quite responsible and proactive in undertaking chores around the house. I would help in ‘putting to order’ my two younger brothers.

The Beginning of Change

Then I went to boarding school in class four. I was nine years old.

My new school was very good. It was an all-girls school, one of the most coveted in our province. It was a missionary-run school. We studied hard and the school endeavored to nurture strictly disciplined young ladies.

I loved the school at first sight. The compound was serene and fresh. A breath of fresh air. The girls’ uniforms were all pristine – spotlessly clean without a crease. Their shoes were black and shining. When a girl’s strand of hair was out of place, she was reprimanded. The girls walked in a single file at all times, and they spoke in hushed tones. Laughing loudly was highly discouraged as it portrayed uncultured lady behaviour. In fact, they insisted that we ‘laugh like a lady’.

You may Also Like: “My Unexpected Pregnancy While in Campus” -Laila’s Story

But there was a problem. Gradually, I became less expressive. Like many other girls, I was always scared of doing wrong because of the punishments. Almost everything was not allowed. Everything that we did, we had to first ask for permission. We were always second-guessing ourselves, even when something was straightforward. I was always hesitant about speaking out, or doing anything. I wasn’t used to that kind of life.

When I returned home during mid-term, I told my mom that I didn’t like the school. That I was unhappy in it. That it was making me this person who was afraid of doing or saying anything.

Let me take you back a little bit. In those days – the early 90’s, being taken to a boarding school was prestigious. In the village, it meant that your parents were ‘people of means’. Having a child in a boarding school – a girls’ boarding school run by missionaries no less, was enough to earn you the envy of many in the community.

When I told my mom that I wasn’t happy in the school and that I wanted to transfer, she was livid! She went on to ask me if I knew how much she and my dad had denied themselves in order to pay for my (expensive) school fees. That so many people in the had congratulated them for taking their child to such a good school; if only they could do the same for their children.

My parents were businesspeople and were well known in the community. They lived in a nice mansion in town which they had taken years to put up. They were the envy of many. Taking their daughter to a prestigious boarding school further elevated their social status.

You may Also Like: Pregnant and in a Strict Christian University: Amanda’s Story

My mom told me she didn’t want to hear about that anymore, that the chapter was closed. She instructed me to go learn in school and stop with the sideshows. That she and my dad expected good grades from me, nothing less. I was not going to be transferred, so I better deal with it. Period.

And that was the end of that story. I never brought it up again.

When I returned to school, I remained unhappy. Really unhappy. I became withdrawn and kept to myself. The school had excellent facilities and performed well, but I found no joy in the school.

The energy that I had for speaking out, having fun, playing, leading groups -all that evaporated. I had become a shadow of my former self. I missed my old life and the cheerful, free-spirited girl that I used to be.

For years, I would cry as I buried myself in my books. It paid off, because I scored very well in my KCPE and was called to a good national school in Nairobi. And thankfully, not a missionary school! Just a regular public national school.

Then I found my freedom back!

But not in the good kind of way.

Forms one and two were of me lazing around, chillaxing and not believing that I had all this freedom around me. There was no one to command us around, monitor us round-the-clock, no fear of punishments, and life was not as strict as in the missionary school. I relaxed completely and of course, this showed in my grades which plummeted.

See Also: Oops! How I Became a Teen Mom -Again!!

My parents would scold me, but I didn’t feel like I cared. I didn’t outrightly disrespect them, but I also didn’t try to care – I don’t know how I can best describe that. I felt some type of way about their decision to send me to a boarding school, and them not listening to me when I told them I wanted to transfer.

Well, in form three, I joined a group of friends and we started sneaking out of school to go for parties. This continued all the way to form four.

I wasn’t surprised when I didn’t score well in my KCSE, enough to earn me admission to a public university. I had spent the four years of high school either catching up on the life I believed I missed in the strict boarding school from class 4 – 8 or just feeling rebellious for what I thought had been taken away from me.

My parents then had to look for money for me to join a private university. They constantly kept telling me about how disappointed they were in me. My mom even told me one day:

“Whatever happened to you? Since when did you become this thick? These are not the grades you were supposed to score!”

No Connection with Parents

Sadly, I felt as though my parents and I had lost our connection once they sent me away to boarding school at the age of nine years. None of my other siblings went to boarding by the way. It was just me.

I also felt that I had let myself down – to some extent. I knew that I could have scored better in my KCSE. But life had happened and I had to accept it that way.

Midway in my first year of private university, my father suffered a stroke. He became bedridden and was completely debilitated. At that time, my brothers were still in school – one in high school and the other in primary school.

Three months later, I could see how much my mom was struggling trying to run the businesses and trying to be both mom and dad while staying sane. The business ended up doing so badly that my mom had to rent out our nice mansion and move us to the small wooden house my dad had built in our ancestral land in the village.

Dropping out of University

Seeing how much mom was struggling, what with my dad’s medical bills eating into their savings and with no prospects of him getting better, I decided to drop out of university and get a job that could help pay the school fees for my brothers. She protested, saying that she could still afford to pay for me, but I knew she was just being modest. There was no way she could afford it. My school fees was expensive to be honest.

So I left university.

Also Read: The Day my Mother Confronted me about my ‘Secret Pregnancy’ – Popular Radio Presenter Shares her Story

I came to Nairobi and got small small jobs which enabled me to send money back home. Together with my mom, we managed to successfully educate my brothers – the lastborn has just completed his undergraduate degree in a private university.

I turned 41 years old last month and on my birthday, we had a talk with my mom. We talked about my boarding school experience. She admitted to having noted a change in me immediately I went to boarding, but that she didn’t want to entertain the thought of me not being in that prestigious school that had earned them the envy of many. So she chose not to hear me.

She also regretted it because she remembered the words she had once told me – that I would make a great leader. We talked about how the school inhibited me and made me retreat into a shell, killing that growing leadership spark that I had in me.

I still feel like a part of me was robbed. Something that I can never take back.

Boarding for my Children?

I have two children now – an 11-year-old daughter and a six-year-old son. I would never take them to boarding school in primary. Let me bond with them as much as I can. As for secondary school, I will let them choose if they want to go to a boarding or day school. I will never impose that decision on them. It will be entirely up to them, and if they do choose to board and later on tell me that they want to transfer to a day school, I will not hesitate to do so.” –END

*not her real name

If you have a story you’d like to share with other parents, you can email me on maryanne@mummytales.com