Every first Thursday of the month, 26-year-old Jonathan Muema accompanies his wife and seven month-old son to a well-baby clinic. During these visits, his son is given the required immunization, his weight, height, and feeding habits checked, as well as his general progress. When they return home later that day, Jonathan helps to feed his son, changes his diaper, and then rocks him to sleep. This new father says he does all these things because he wants to be involved in all aspects of his child’s life. He does not believe that such roles should be exclusively left to his wife.

“This is our son, and it is not fair that my wife Agnes should shoulder the responsibility of early childcare all by herself,” he says.

This involvement in his son’s life did not just start. It has a history.

“I accompanied my wife for all her antenatal clinics. I wanted to let her know that we were in this together,” says the Bsc graduate, who is an information technology expert.

As his wife’s pregnancy advanced, and when it became difficult for her to do some chores, such as mop the floor, Jonathan would gladly help out.

“When I came home from work, I would prepare super and thereafter wash the dishes. I’d also mop the floor daily, and ensure that the house was clean and tidy.”

Jonathan also made a point of reading and researching about every stage of his wife’s pregnancy. Towards the end of the pregnancy, he is the one who packed his wife’s hospital bag, which included all the items she and their baby would need while in hospital. When his wife went into labour, Jonathan spent hours rubbing her back and massaging her, helping her through the breathing motions and basically offering her the much needed support. For the two days she laboured, he never once left her side.

“I only allowed myself occasional naps by her bedside. Family and friends brought me food at the hospital,” he says.

After hours of prolonged labour, Agnes had to go in for an emergency caesarean delivery. The only regret he has is that doctors refused to allow him into the delivery room. When his son Ray Jasyon was born, Jonathan spent the first four hours of his life with him at the nursery.

“The nurses allowed me to hold him, talk to him and play with him. They even taught me how to change his diaper,” he says. 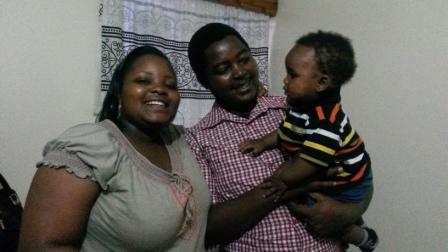 Once home, baby Ray Jayson would cry for hours – Jonathan suspected it was colic, since he had read about it. He had also heard about the services of infant massage specialists, and immediately looked up one in Nairobi. He got in touch with Susan Muriithi of Toto Touch, who taught the couple how to massage their son into total relaxation.

“She taught us how to massage the legs, feet, abdomen, chest, arms, face, buttocks and back, something that would soothe and relax him. After about 30 to 60 minutes of this, he would sleep for several hours, and with time, the colic stopped being a bother.”

Saturdays and Sundays are father and son days at this household. Jonathan says that giving Ray Jason a bath, a full body massage, and later dressing him and then lulling him to sleep is the highlight of his week.

“Massaging my baby has made me know him very well. I am in tune with his body and I know what makes him tick. Whenever something is amiss with him, I can tell immediately. For example, if he has a fever, a diaper rash, is moody, if he has not slept enough during the day, I will know instantly,” he says.

The intimate massage session, he says, allows him and the seven-month-old to communicate through their eyes. It is also a chance for them to play with each other and bond.

Many people might find Jonathan’s fatherhood style unusual. More so because traditionally, men have always distanced themselves from matters of childbirth, and frown on a hands-on approach to caring for infants. Pregnancy, delivery, breastfeeding, feeding, changing diapers and bathing children have always been left to the mother and the women around her. In fact, many men have been known to only start bonding with their children once they start to walk.

But there is a new generation of men who are breaking these norms through the kind of interaction they have with their children. Jonathan is one of them, and so is his friend, 31 year-old banker, Kennedy Muchiri.

Kennedy is a new father too: his son Jeremy is five months old.

“I knew from the start that I would be actively involved in my child’s life. From the moment I discovered that my wife Rose was pregnant, I promised her that I would accompany her for all her antenatal clinics. I only requested that she inform me of the clinic appointment a few days in advance, to enable me make the necessary arrangements at work,” says the economics and accounting graduate.

Midway through the pregnancy, his wife developed a craving for soup from a specific butchery in their Kinoo neighbourhood. Like the dedicated husband he is, he passed by the butchery every evening after work to buy her fresh soup.

But this is not all, he planned his annual leave to coincide with his wife’s due date, and when the time came, Kennedy was there, and unlike his friend who was barred from the delivery room, he was present at the operating room.

“Rose was given a partial epidural which numbed her lower body only. During the surgery, we passed the time chatting and joking,” he says.

After the delivery, Kennedy tirelessly shuttled between the nursery and the recovery room, where he spent hours monitoring both wife and son.

Once home, he bathed his son every single day during his month-long leave, especially since his wife as still recuperating from the surgery. He also diligently cleaned the umbilical cord, just like the nurses had taught him to, until it fell off. He would also change his diaper and rock him to sleep as his recovering wife rested.

In an effort to find other ways to bond with his son, he took an interest in infant massage, which had been mentioned to him by his friend Jonathan.

“The massage specialist taught my wife and I how to apply touches that would soothe and relax him. After doing so a few times, I began to read my son’s cues, and as a result discovered what makes him happy and what doesn’t.”

For the last five months, Kennedy has been massaging his son, each session lasting 30 to 60 minutes. While he used to do this on a daily basis while on leave, his work schedule allows him three days a week – once on a weekday, and every Saturday and Sunday.

He speaks proudly of his achievements.

“No one can tell me anything new about my son. I have been there for each and every one of his milestones. I can easily tell when he is unwell, when he is not happy or when he has had a rough day. I also know his temperament –he is a calm boy just like his mother.”

Both Jonathan and Kennedy agree that their approach to fatherhood is quite different from that of their fathers.

“Many fathers begin to bond with their children when they are a little older – when they can talk and walk – but why, yet a child belongs to both the man and woman? I don’t see why my wife should shoulder the burden of parenting alone,” Jonathan says.

Kennedy has no memory of his father bathing or feeding him.

“My father and I mainly bonded during road trips. I have no memory of him bathing or feeding me. I do not believe in the separation of feminine and masculine roles, save for the ones that are physically limiting, such as breastfeeding. Apart from this, I do everything else for my son,” says Kennedy.

As originally published in the Nation.