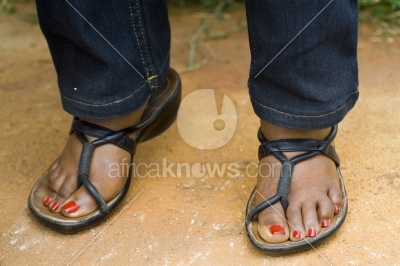 I am currently at 32 weeks, and for the last couple of weeks, have not had the pleasure of having a clean pair of soles on my feet. Before I got pregnant, my soles were a smooth shade of soft pink, very inviting I must say. But those are yester days.

Today, while I was taking a nap (which I often do for the better part of the day), the hubby had a glimpse of my soles and let out a frightening shriek that immediately awoke me from my snooze. Now, if a man lets out a shriek like that one, then you know that something’s definitely amiss. The hubby was expressing horror at the color of the soles of my feet, which I must say were somewhat between a shade of dark tan and black, which is not very nice for a gracious lady like myself. Major problem though was the hubby’s insistence that the soles were ashen black, which was not a very nice thing to hear, though I confess he was right.

Thing is, I have been wearing, on a daily basis, these Maasai sandals that are soooooooo comfortable I cannot imagine myself in any other shoes. The sandals are flat and ‘expandable’, because when my feet decide to swell, which they often do, the Maasai sandals are quick to accommodate the swelling, unlike other shoes I’ve tried before. Now, walking around this dusty town of Nairobi has the effect of getting my feet to be a non-pleasant sight at the end of the day, comparable to those of a street urchin’s. Not good at all. It doesn’t help much that my bathroom floor is all tiles, I miss those old earthen bathroom floors we grew up in that were as rough as sandpaper, where I would have easily scrubbed my feet on them and they would have remained luscious pink. I can reach neither my feet nor my soles anymore to give them a good cleaning, so the best I can do is, with much struggle, pass my face towel over them when taking a shower at the end of the day. But judging by the hubby’s shriek, clearly this is not having the desired effect.

Anyway, the hubby has pitifully offered to scrub them soles and feet for me today, seeing as the trips to the salon for a pedicure are becoming more difficult as the days go by as my beautician is quite some kilometers away and I simply don’t have the energy to drive that far in this sweltering March heat. I have been using this beautician of mine for the last 14 years, and I cannot fathom the possibility of starting anew with someone else.  All those years, no one else has ever touched my nails for a manicure or pedicure. It’s like I’ve been in a marriage with her, she knows and understands my needs and body so well, I am at a loss at what I would do without her. I have been contemplating visiting nearby beauty parlors to get the service done, but I am too chicken to allow anyone else touch my nails. I actually get goose bumps when I think about it. So I guess I will have to suffer the consequences of dark tan/black feet and soles. For now, I hope the hubby will make it a weekly habit to scrub them soles. I will soon update you on that. 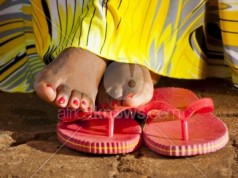 Tale of the Dark Feet, part 2