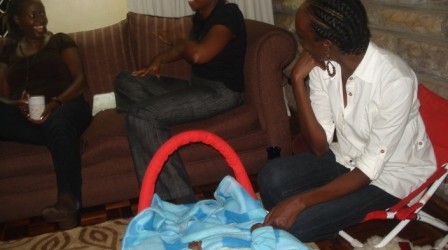 Many moms love listening to each others’ birth stories. I didn’t know this until I became a mom myself, because when visitors came to see me when I got Kitty – both at hospital and at home, the first question was always: Ehe, ebu tell us how it happened… ebu start from the beginning and don’t you dare miss out on any detail, tell us what were you doing, who were you with, how did you know you were in labor, did you scream, did you pull your hairs out, did you insult the nurses when the pain was at it’s climax…. their faces all pregnant with expectation of the narration that you’ll give, which they anticipate will be filled with lots of drama. Four hours later, you’ll find that the same story is still being told asin you haven’t gotten to the end, largely because the other moms keep interrupting you to narrate tid bits of their own birth stories as well. Women! 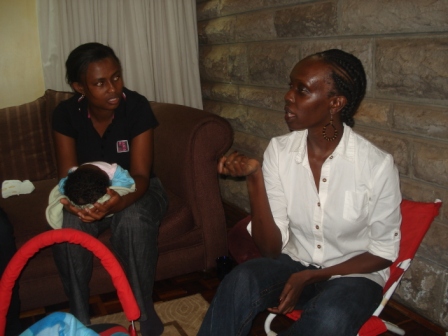 Anyway so how was Ello’s birth?

Well, I knew right from the beginning that I would have a CS (on medical grounds). And I knew that I would have it at week 38. So at 36 weeks, my gynae and I settled on a date for the delivery, the date being Friday 5th April 2013, at 9.00am.

So on the eve of the ‘big day’, in the evening hours, me and my hospital bag checked ourselves into hospital, accompanied by Baba Kitty. This was at around 4.30pm. So after being cleared and the paperwork complete, it was just now to wait for 9am the following day. So we beat stories with Baba Kitty and in between, my gynaecologist, anesthetist and a theatre nurse paid me a visit just to chat me up, find out how I was doing, prep me for the following day and to reassure me that all was gonna be well. Baba Kitty left at about 9pm and I was kinda sad to see him go. Hospitals can be cold, lonely and very boring. Then I slept after having a chat with God.

That night was ok, only that I got extremely hungry and thirsty, but I couldn’t ingest anything after midnight because I was due for theatre in a few hours. On previous nights during the pregnancy I had been snacking at least three times during the night, so having to make do with the hunger and thirst that night was quite the challenge.

The following morning, I was up and ready and looking forward to having my baby delivered. Baba Kitty too was there up and early and together we shared in this expectation. At 8.50am, the staff came for me, and just before I was wheeled into theatre, the last person I spoke to was Baba Kitty, and with a reassuring kiss from him before the doors shut, I knew that all was gonna be well.

Anyways, once in the theatre, I was glad to see my gynae and the rest of the team. Same team of doctors (gynae, paeditrician and anaesthetist) that delivered Kitty, so it was just a case of same script, same cast, different baby.

There was a lady who took the time to introduce me to all the other peoples in the theatre and their titles – which I forgot soon after, but I know they all played a key role in the whole affair.

At 8.58 everything was all set, and we were just chilling. At exactly 9.00am, the anaesthetist sent me away to la la land. When I finally came to – I don’t know how long after, I remember being wheeled out of the recovery room, and who was the first person I saw coming towards me with a warm hearty smile and congratulating me? Baba Kitty. He told me that our baby boy was okay and very beautiful. I was in and out of drowsiness for a while after and I don’t know for how long I slept, but I remember at around 2pm is when baby Ello was finally brought to me. I fell in love with him instantly. The last two or so months of the pregnancy had been abit difficult for me because he was in transverse position (lying across the belly) and he was a biggish baby (3.7 kgs), so he really weighed me down – literally. I was glad to finally meet my second son. Once I had settled in and bonded with Ello is when his father and I began texting family and friends sharing the good news with them.

It’s just a plain tale, nothing dramatic. One that can be told in three minutes flat (I think).