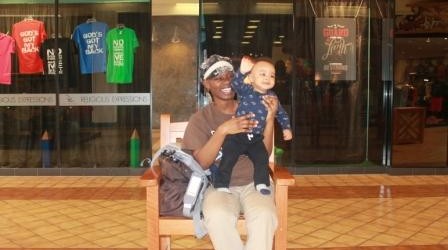 Nabubwaya Chambers is a Kenyan mom raising her 11 month old son together with her husband Lee in Texas, USA. Last time, Nabubwaya told us about the maiden bus ride that she and her husband took their son on (read the post here). Today, she lets us know exactly how that trip to the mall went.

“We took a nice, relaxing walk around different stores at the mall as we did some window shopping. Lema was still asleep. As we walked around, I thought to myself of how good it always is to find great deals around town. For some reason, it always seems as though there is a ‘sale’ every month, where there are good deals in most stores. 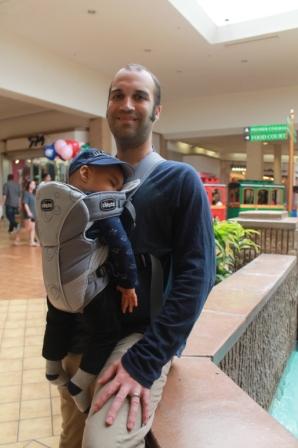 When we decided to take a seat at one of the benches, Lema immediately woke up. It’s interesting how he seems to doze off when we are in motion but once the movement stops, he wakes up instantly. It’s the same thing he does when he’s being rocked while fussing or sleepy.

I then fed him some milk then we took a few photos as we watched the train pass by our bench. We had picked a spot next to some really cool mobile toys that caught his eyes. He kept starring at them and clearly seemed to gravitate towards those toys.

Baba Lema and I decided to get some tickets to take him for a train ride. So we cued and paid for our ticket and as you may have guessed, there was a deal included…buy two get one free ticket. The Kenyan in me enjoys hearing the word “free”. Everything else doesn’t matter before and after the word “free” when it comes to sales and deals at stores. 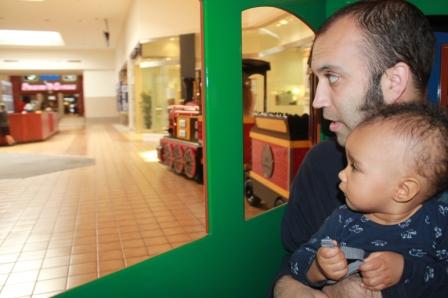 The train ride was the coolest part of that tour of the mall. Lema was so fascinated and just kept gawking at everyone on board including the passersby. He would occasionally glance towards our direction then back to the fascination of the moment. I enjoyed watching his reaction every time the train choo-chooed and made cool turns. After a few minutes, our ride came to an end. We took more photos, had a meal at a café, shopped for some books, toys, and movies then headed back to the bus stop to catch our last bus ride back home in great stride. At this time we had a very happy, well rested, entertained, and energetic baby in tow.

We boarded our bus and no sooner had we sat down than the energetic bundle of joy fell asleep in his father’s arms. He was totally wiped out. Thanks city bus for helping our baby nap so effortlessly.

We had fun times and I guess Lema’s first bus rides will certainly be well thought of and fondly remembered for years to come.”

*You can read more of Nabubwaya’s notes here.