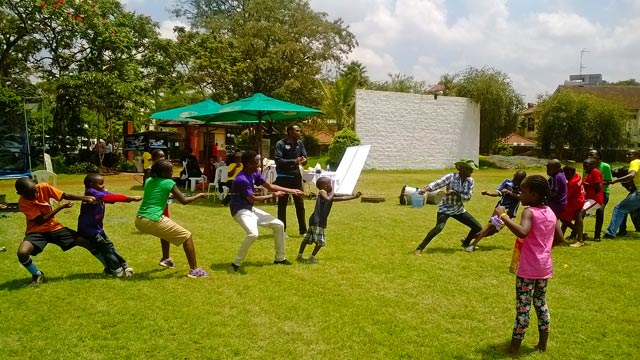 Last we heard from Tata Nimmo, she was introducing herself to us, and also introducing her six-year old nephew Safari. Safari is the firstborn child of Tata Nimmo’s twin sister, and the sisters –having grown up very close, still enjoy the same kind of relationship today –enough to make Tata Nimmo feel as though Safari is her own child too. Tata Nimmo talked about Safari’s diagnosis with Cerebral Palsy (CP) at the age of two years, the lessons learnt and pieces of advice on the same.

Today, Tata Nimmo talks about the fears they felt after finding out they were raising a child with special needs, and the struggle to accept that this condition is a lifelong one; one that that they would have to learn to cope with. Safari is now six years old.

When Safari was four years-old, we got a new addition to the family –his baby sister Maua –who is quite a cheeky little mouse at two years old. They are best of friends -well most of the times.

Watching Maua grow and develop into the beautiful girl that she is continues to bring back memories of Safari at the same age. At two years old, his speech was only comprehensible to we his family, and we often we had to explain to people what he was saying, with most looking at us funny, wondering why a big boy like him still talked ‘gibberish’, or why he had to walk between his mother and I, or why we still carried him on our backs.

We only explained to those that had time to listen. Some people were sympathetic, while others took their time to share with us stories of people they know who had children whose condition was worse, at times laced with horrid tales of mothers hiding such children in their homes. We heard of many such stories in the neighborhood and at the hospital where we would take Safari for his therapy sessions. But for those who understood his condition, they applauded us for taking him with us and not hiding him in the house.

Amid all this, we were struggling to accept that his Cerebral Palsy was going to be with him; with us, for the rest of his life. It was slowly sinking that it was not something Safari would outgrow, and there was no miracle cure anywhere. We just had to face life for the reality that it was. It certainly wasn’t easy for his mum. There she was, a single mum, with a special needs child. She had no choice but to be strong, somehow.

Interestingly, from our interactions with other mums of children with Cerebral Palsy, we have noticed that many are single mums –most having been abandoned after diagnosis. The few men I have spotted in school meetings, therapy sessions or CP-related activities are to be lauded because many find it hard to deal with the issues surrounding raising a child with special needs. I can tell you for sure that without the necessary support, raising a child with disability can be one difficult journey.

Safari’s mum has a strong supportive network around her, from our mum, myself and our kid sister. We all continue to play a big role in supporting her, something we have done ever since he was born. From babysitting, to taking him for therapy, to outings, to helping him with his homework (he is in an integrated school), to financial support; we have all done our best to be there.

When it comes to school, there have been challenges too. We have had to change schools and have sit-downs with teachers and children who play with him to try and include him in their activities and not stigmatize or isolate him.

But to be honest, the journey to ‘acceptance’ is a bumpy one. It has its joys and setbacks and I don’t know if one ever gets to that point of being ‘okay’. You simply just handle it one day at a time as you allow yourself to celebrate every milestone.

My advise to parents of special needs children?

Make the child feel as part of the family and allow him to live as normal a life as he/she can. Take your child to outings, yes people will stare, but then again they always do, and that should not deter you.