We have been reading from Tata Nimmo about their journey of raising a child with special needs. Six year-old Safari has Cerebral Palsy (CP), which was diagnosed at the age of two years, with his mother and aunt tracing it back to an jaundice episode when he was a newborn.

Tata Nimmo has told us of the difficult journey that was accepting that they were raising a special needs child, and some of the challenges they have faced along the way. Tata Nimmo is a twin sister to Safari’s mum.

After having accepted Safari’s CP, Nimmo and her sister began the search for early intervention. Today, she tells us about the therapy they have accessed for Safari.

Finding therapy of Safari was a relief, and it was great progress. Finally, we were moving from the uncertainty about Safari’s condition into what seemed like an answer. It was the pediatrician at the Kiambu General Hospital where Safari had been diagnosed with mild CP who referred us to an occupational therapist.

Related: “Accepting that Safari is a Special Needs Child has not Been Easy” -Tata Nimmo.

But then, ‘Occupational therapist’ was a new term to us. What we had previously heard of was a physio-therapist, and in my view this is what Safari needed to strengthen his motor skills. But as the doctor explained to us, an Occupational therapist (OC) is different in the sense that he/she uses occupational therapy to develop, recover, or maintain the daily living and work skills of people with a physical, mental, or cognitive disorders.

When they talk of life skills: they teach them play therapy – how to socialize and play with other children, how to use toilet facilities – basically skills that come naturally to most children with little effort. But due to the delayed development of special needs children, some of these skills come later in life or they need to be taught, and at times, retaught.

Following the doctor’s advice, our first stop was the Kenya Institute of Special Education (KISE) – which had an in-house OC. However, they referred us to a children’s center within our estate that catered for children with Cerebral Palsy (CP). Interestingly, this was a place we passed through every day on our way home! We were thankful that it was not too far from us, as we had previously thought that a therapy place would be miles away from home.

The occupational therapy centre was a one storey building coated in all white paint, with a mural of children on wheelchairs receiving assistance from a doctor. The ground floor acted as a pre-school while the top floor hosted the therapy unit and some hostels for residential special needs children.

Marion, who was the Occupational Therapist at the centre was a tall, slender young woman, almost fragile you might say but her actions of pulling, and yanking at Safari’s hands and feet set him on a crying frenzy that threatened to bring the roof down. So I did what I always do; I asked questions as I told young Safari tales of us getting on an airplane (a wish that I know when I fulfill it, I will be his forever love:)).

The occupational therapy included a massage which was done using olive oil, kneading and stretching of Safari’s bones, his learning to step aided by two long cylindrical poles, and at times he would push a cart around the hallways as we supervised him.

Dr. Kruger helped a courageous young lady called Maria (of The Njeri Maria Foundation) with her speech skills, and today, Maria is as eloquent as any other young person out there. She is quite an inspiration, and whenever I see her I know that Safari will be okay. Maria is a student at the Nazarene University and she is living her life to the fullest.

Along the way, as we spoke to other doctors and interacted with fellow parents, we decided to change therapy places, and we identified a place in Westlands. However, we did not have a good experience there and decided to move Safari again. Today, we take him to Therapy for Kids at the China Centre, and its working out well for all of us.

The thing we have learnt with therapy is to celebrate the milestones that Safari makes. After our first session of therapy, while at home, Safari stood up without support from anyone or anything. He was two years old then and he had never been able to stand on his own until then! Even though he stood for just a few seconds, we were very excited and danced around the house in jubilation. The mere act of this milestone was such an encouragement that we took him to therapy consistently until he was able to walk, without support. Today, Safari is our ‘errand boy’ where we even send him to run grocery errands, though we always watch from a distance.

Therapy is meant to give him as much independence as possible, and it is happening slowly, but we are grateful because Safari has indeed come a very long way. The thing with therapy is to never lose hope. I must say that it’s not an easy task as it calls for total commitment especially from all family members. The good thing is once you see the child’s progress and meet other parents who have been in the journey longer, and are still keeping on, it gives you the energy to keep moving.

These are the therapy tips I’d like to offer any parents or guardians raising special needs children: 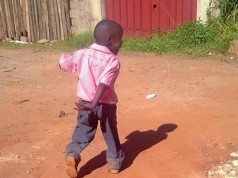