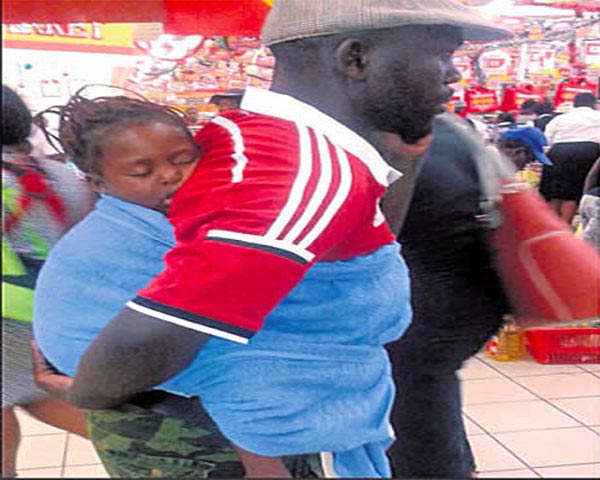 Have you ever seen a man carrying his child on his back – you know – the way we women do it with a lesso or towel? I’m yet to see one myself, but one such man in South Africa recently caused a stir when he was spotted in a supermarket carrying his 3 year-old daughter Funzani on his back – tied with a towel. Awwww how sweeeeeet!

But apparently not everybody thought it was a ‘sweet’ move, as 26 year-old Sandani Muremela ended up being laughed at and ridiculed by fellow men, with many accusing his wife of having cast a ‘love spell’ on him – I guess because there’s no way a sane, fully grown African man can be seen in public carrying around a child tied to his back – the way we women do it.

But this caring father couldn’t be bothered much by people’s comments. He had opted to carry his daughter that way in the supermarket, in a bid to make his shopping experience much easier (good idea). Sandani also said that he has chosen to be a present father for his daughter, himself having being raised by a single mum after his father left the family when he was just a year old.

“I don’t want my child not to know the love of a father. It’s not a good thing at all. “I love my daughter and will do everything to protect her,” he said.

I could just about tear up right now.

The girl’s mum, 24 year-old Lebohang Mashego acknowledged Sandani’s dedication to his daughter, saying that she knew she could depend on him.

“I’m proud of him. I’m glad he’s not ashamed to carry our daughter like that, and I didn’t give him korobela (the equivalent of kamuti I guess?).”

Do you know of any dads who carry their children tied to their backs, with a lesso or towel? Does this happen in Kenya? I would sure like to meet one! 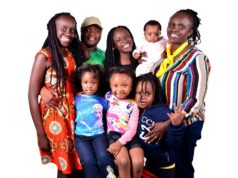