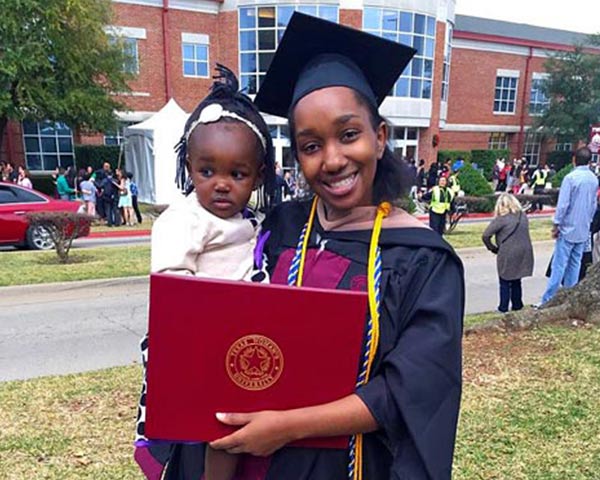 27 year-old Caroline Gachii had a dramatic entry into motherhood. She almost lost her life due to a pregnancy-related condition which often begins after the 20th week. Today, Caroline shares her experience with preeclampsia, in the hope of creating awareness about this condition which can be fatal if not diagnosed early and managed effectively.

“On 10 January 2014, I found out I was going to be a mom for the first time. I was so excited. But my joy was hampered by this nagging pain I had in my back that just wouldn’t go away. It didn’t help that I have a desk job, which only made my back problems worse as the pregnancy progressed. Because of my pregnant status, I was limited to the drugs I could take, and my chiropractor basically became my best friend.

During my fifth month of pregnancy, my feet started swelling – which is normal for pregnant women, but when you add the constant back pain to this discomfort, my life became one miserable shell. By the sixth month, my back pain had gotten so bad that my doctor put me on bed rest, where I was only allowed about to be on my feet for up to 10 minutes a day.

I pressed on and kept my feet elevated as per doctor’s orders, doing everything possible as I anticipated my daughter’s birth. I would then visit my doctor every two weeks. On all these visits, my blood pressure was normal, but there were still questions about why I was getting so swollen up. The doctor however concluded that I was just retaining a lot of water.

After 35 weeks I started making weekly visits to the doctor, and at this point I was swollen like a balloon. On my 36 week appointment, my doctor expressed concerned about my rapid weight gain – I had added 9kgs in just a month, yet I had not changed my eating habits and I was in fact, having difficulties eating because of the intense pain in my back.

The doctor decided to do a cervix test where she checked for among others –if I had dilated. After this test, I started bleeding.