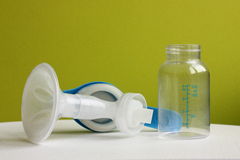 So the hubby and I got invited to this lunch Sunday afternoon. A family friend from Coast had recently married and was now throwing a lunch for his friends. The thought of the Swahili dishes made me salivate, and I had been drooling all week long thinking of how I was going to devour the food. Coastarians really know how to make good food I tell you. Seeing as I’m a lactating mother, I am subjected to eating ndumas, ngwacis, njahis, porridge and such kinds of nutritious foods all day long. They don’t taste great at all, but they are nutritious all the same. The prospect of eating sumptuous Swahili food was all too exciting for me. And besides, all week long, I am in the house doing baby-related stuff and talking baby talk, so any chance to be outdoors and interact with adults is a eureka moment for me.

Since Kitty feeds every 1.5 hours, we needed to have a system where he would still feed while I was away, because we didn’t expect to be back home soon. I had earlier bought this breast pump at a cost of Ksh 550, the kind that has this sorta rubber knob/ball at the base (it looks like the horn of a blackmamba bicycle), the one that you have to keep squeezing for it to ‘suck’ the milk out of the breast through the nipple.

The lunch was at 1pm and we intended to leave the house at 12.30 pm. So at around 11am, we began working on my breast and the pump. With two feeding bottles ready to be filled, and with my milk supply being generally good, we figured the process of pumping milk would take about fifteen minutes.

Since it was our first time to use the pump, we inevitably encountered some challenges. For starters, placing the mouth of the pump at the breast and ensuring there was no air getting into the pump was not easy. Then now came the real work – manually expressing the milk. I squeezed and squeezed the knob/ball hard, releasing it after every squeeze allowing for enough pressure to extract the milk. Three minutes later, my hand was so tired so I asked the hubby to take over. Because he has eaten more obusuma than me and has more strength, the pumping/squeezing was naturally less difficult. So he squeezed and pumped. He squeezed and pumped some more. Then squeezed and pumped again. We took turns squeezing and pumping the milk out and because time was moving fast, we acted in haste. I didn’t want to arrive late lest I find the Swahili food was over.

It was after 40 minutes of squeezing and pumping that we decided to take a break. And when we looked at what we had finally collected, we were shocked. It was no more than a quarter of a teaspoon! ONLY! Imagine, after all that hard work. How now?

I tell you, there is nothing more frustrating than expressing breastmilk. Atleast in my experience. The hubby and I had both expected that the milk would come out flowing as it usually does when Kitty is feeding, but shock on our poor selves. Just some whitish substance that looked more like water than milk was coming out. It is this water-milk substance that filled a quarter of a teaspoon. Ohh dear.

So we tried again, with more determination this time. But by then, my breasts were aching, I was tired and so frustrated I didn’t want to try anymore. Sadly, I had to stay home as the hubby went for the lunch, leaving me to eat my usual meal of njahis and soup for lunch.

This expressing business clearly is not as easy as I thought. Right now I’m beginning to panic as I think of my return to work after my maternity leave ends. I intend to breastfeed Kitty exclusively for 6 months, but I’m wondering if I’ll now be able to, what with collecting a quarter of a teaspoon of milk in 40 minutes. If I do the math, it means I will fill a feeding bottle in December! Gosh!

How do other mothers do it? Is the problem with the pump, my breasts, the squeezing procedure or what? If anyone out there has any advice on expressing breastmilk, please let me know coz right now I’m at a loss of what to do.

This milking business is proving to be abit too difficult. *Sigh and shaking my head in misery.* 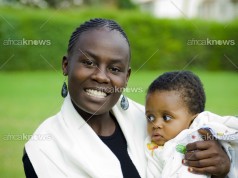 Is it Okay to Mix Expressed Breast Milk with Formula Milk? 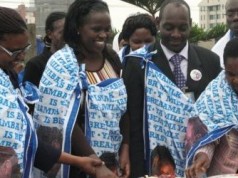 Hon. Sarah Korere on Breastfeeding Her Baby in Parliament