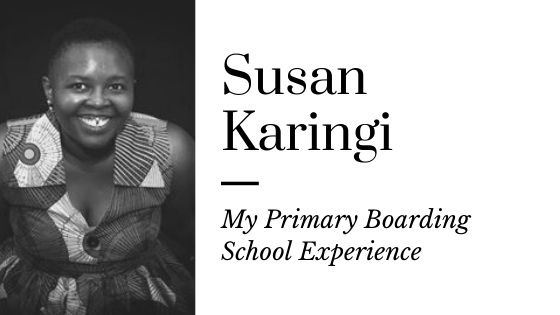 Hello friends and welcome back to Mummy Tales. So last year I did this post: ‘The Headteacher Stepped on Her Neck as She Lay Down, While Beating Her’ and got quite some feedback after I published it. It was the story about a mom whose boarding experience in primary school made her resolve to never do the same to her children. Please take time to read it in case you didn’t, and also let me know what you think, especially if you attended a boarding primary school.

So today, I share one of the responses I received from that article. It is by Susan Karingi, who tells of her primary boarding school experience. If you have a story that you’d like to share with other moms, you can email me on maryanne@mummytales.com

This is Susan’s story:

“When I was told I would join boarding school in class four at the age of 10 years, I was ecstatic. Finally, I was joining the ‘big girls club’. You see, back in the day, transferring to a boarding school was a big deal, and the thought alone was so exciting!

I did my interviews at two different schools, both in Kirinyaga, and I passed both. Between the two, my parents chose the stricter Catholic school.

We were required to label all our items with our three names. This included panties and handkerchiefs. I remember how my mum and the house help stayed up late in the night tirelessly stitching my names on all items. While it may have been stressful for them, to me it was so exciting as it marked the beginning of a new phase of my life. Back then I did not know what awaited me.

When I got into the school I quickly learned that there were three things of high importance in the school:

The above expectations were instilled in us through use of the cane and verbal abuse. It was horrible. For example, the Sisters would come get you out of class if the area you cleaned was not up to par according to their standards. The prefect in charge of that specific area would also be beaten and expected to clean the area for slacking on her supervisory duties.

Favouritism was rife and the girls who were the apples of the Sisters’ eyes got off easier than the rest of us. You would see the subtle glee in their eyes as they watched other girls get punished. So we tried our best to be in the good books.

When it came to our performance, we tried not to drop our grades. Let me talk about the infamous ‘mlolongo day’. On this day, we would line up in our respective classes from position 1 to the last based on our performance in exams. If you improved, you were spared. It was a very brutal way of getting us girls to perform. Those who had dropped from the previous performance got it rough. Their bottoms or ‘nyama ya serikali’ as we would say, would be whipped until they became red and swollen like those of a baboon.

Talking of baboons. The school was filled with these cheeky vervet monkeys that loved eating mangoes from a huge mango tree in the school compound. Sometimes, they would even waste some of them. Yet, if you dared eat a single mango from that tree, the wrath of the administration would be upon you.

The school administration did not really encourage any form of extra-curricular activities. So we grew up not knowing much else other than books (mostly academic), books and more books. Simple games like skipping rope, ‘kati’ or ‘bladder’ were all banned. It was a rather bland existence.

But, we lived for Sundays. That was the day we would drink ‘nylon tea’ which was basically a mixture of milk and water. The milk though was often cold and over sweetened. But the fat slice of bread with a centimetre-thick layer of spread was heaven.

Breakfast everyday was porridge. It was an interesting porridge. The flour would settle to the bottom of our oily plates, while the water would rise as the ‘top layer’. I never quite understood how that chemistry worked out.

Toothpaste for a Snack?

We were always hungry as the portions served were too small. Ever looked at toothpaste and seen it as a snack? Well, we would rub it on the back of our hands till it was white and then lick it off slowly. We also had this quirky behaviour of carrying our spoons everywhere. They were the only pieces of cutlery that mattered. So you would meet with misplaced spoons all over the school compound. Even down the river as we called it.

Stolen Water from the River

Come to think of it, it was a canal, a man-made diversion for the school and community around it. We had this huge stone water tank that would overflow with water. We would line our buckets to collect the overflow. On the one hand we had an overflowing tank and on the other the taps where we would have fetched water were mostly dry. We never had any running water unless you sucked on the tap so hard. But still, that would only fill a cup.

So everyday in the evening after reciting the rosary, we would rush down the road to the river and fetch water, clean our clothes, fetch bathing water as well as water for cleaning the area allocated to us. This we had to do with cold, hard, metal buckets.

Water was precious, and the lazy girls would steal it at night as you slept. Now imagine waking up in the morning to an empty bucket! The river trips were only done in the evening, and remember all the other taps were dry. Yet it was a must for you to have that bath or else the dorm Prefect would report you to Sister Matron. Imagine the stress!

Any leaking gutter was heaven sent, you would at least get clean water unlike the brown one that the river did. Come to think of it, I learnt how to filter out that river water like a pro and how to make water stretch and last for long. I could do a heavy cleaning with just three buckets of water.

I left the school knowing how to blend in and lie low so as not to be noticed by the sisters or teachers. I was a top performer but still, that did not do anything for myself esteem. Punishments were brutal, you would be told to go scrub the pigs or the pigs sty or kneel out in the cold the whole evening preps. This, after being beaten and shamed in front of the whole school during school assembly.

I still wonder how the Sisters slept at night after doing all that to kids.

They instilled the fear of any authority figure, in me. I have struggled with this and it has not been easy. It has really kept me from running for positions of leadership. I actually have had leadership thrust upon me by circumstances. I am still on my road to finding my true North.

My primary school boarding experience has had a huge impact on my parenting style. I delayed taking my first born to boarding until class seven and even then, it was only because it was a requirement by the school.

I have also empowered my children to let me know when and if the teacher(s) have crossed the line in matters punishment. I encourage them to talk to me as much as they can, that way I know what is going on in their lives. I also encourage them to be independent, so you will find my youngest who is two and a half dressing herself or doing some light chores.

Cleanliness is also a thing at my house. We take out our beddings every Saturday like we did in school. I am very careful with words I use, because those do more damage than beating ever will.

My last words are – use your words to build your child, be present for your child and discipline them with word, action and rewards. You will have a well-rounded child. Be intentional in your parenting, the world needs more love than hate. A hurt child will grow up into a broken adult. I’m still healing from that experience.”–END.

And that is Susan’s experience. What are your thoughts about it? Also, if you went to a primary boarding school in Kenya, what was your experience? You can share it with me at maryanne@mummytales.com 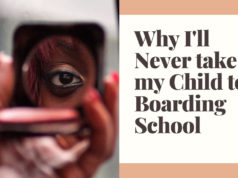 Boarding Schools in Kenya: “The Headmistress Stepped on her Neck as she Lay Down, while Beating Her”

Boarding Schools in Kenya: Why I’ll Not Take my Children to a Boarding Primary School