Welcome to Mummy Tales. This is the story of a Kenyan mother who recorded her thoughts one day when her son was four months old. That is three years ago. However, her thoughts at that particular moment are still very helpful to many women and moms today, especially those who have gone through a difficult motherhood experience. This is her story:

It is 3.40am. I have just fed my four-month old son. He is now sound asleep and so is my husband. Ideally, I should sleep when the baby sleeps but today I am on a reflective mode. See, I am living in rainbow times. I gave birth to our adorable baby boy four months ago. They say he is a rainbow baby -that is a baby born after the loss of another. My journey to motherhood wasn’t as obvious as I thought. It has had its share of joy and pain. I may not understand everything that has happened, but one thing is for sure; all things work for good for those who trust in God.

19th September 2015 was meant to be a joyful time for my husband and I. That day was to be my due date. I had been married for a year and we were both super excited to be expecting. But I developed some complications in my 28th week of pregnancy and my boy had to be born early. I went into premature labor the morning of June 28th. At the hospital, I was found to have dilated to about 6cm. Delivery was near so trying to stop labor was not an option.

Also Read: “Why Couldn’t I Carry my Pregnancies to Term?” Ruby Kimondo’s Story

Unfortunately, the hospital didn’t have a facility to cater for preterm babies and so we were advised to move to a public hospital. In an ambulance, I was rushed to the recommended hospital. We arrived at about 9.30am and at exactly 10am, I delivered my adorable baby boy. He was smaller than the other babies but to me he was the biggest thing in my life. He was taken to the new born unit (NBU) as the doctors attended to me.

Joy and Sorrow at NBU

This was to mark the beginning of a long and agonizing eight days, probably the longest days of my life. My stay at the hospital was difficult in many ways.

First there was my son who was weak hence needed extra care. I was weak from the birthing experience but yet I had to be strong for him. This meant that I would leave my fatigued self, my worries and fears at the NBU door and put on a brave face and heart as I cared for my son. The nurses at NBU often told us that babies pick on the mothers emotions and so if we were sad, they too would be sad which was not good for their frail health.

NBU was a difficult place to be. It was full of uncertainties. One day the baby was okay, the next they weren’t breathing well. Occasionally, there were moments of hope when women who had been at the hospital for months went home with their babies. Then there were extremely sad moments when some babies passed on. Those were tough times. Watching a mum breakdown from the loss of her child was one of those experiences that has never left me. But my baby was doing well. He was feeding well. The doctors and nurses were reassuring.

However, on the morning of July 5th, he developed an infection called sepsis. The extremely selfless pediatricians tried all they could to save him. They really did. People complain about doctors in public hospitals and sometimes rightly so but that was not my experience.  The doctors were really good. My boy was then transferred to the NICU (Newborn Intensive Care Unit). The doctor explained that she had put him on a very strong antibiotic and so all I could do was wait. I think what they say about a parents instincts being strong is true. Something in my heart told me that my son wouldn’t make it.

I left the NICU at 11.00am, took a shower and waited for my 12pm visitors. My 12pm visitors were mainly my parents and siblings. My hubby was no longer a visitor he spent most of his time with me and our boy. I put on a brave face and did not mention my boys’ status to my 12pm visitors. After they left, I told my husband in a tactful manner that the baby was not doing well and that we should prepare for any eventuality. He was still hopeful. He had to go home to pick another visitor. I went back to the NICU to be with my boy. By the time I got there, my boy was breathing his last and sadly I watched him take his last breath.

I do not know, actually I have not known a day in my life when I felt so sad. I always say that at that moment in time, I felt as though heaven had banged its door on my face. I had prayed, I had hoped, and all those good things expected of a Christian. I felt that God had forgotten us.

Where were they when my boy was dying?

At that point those nice Bible verses that are meant to encourage, give hope vanished. I feltthat the heavens had let me down. Please note I say heavens because as a Catholic I believe in Angels and Saints. Where were they when my boy was dying? I decided not to dwell so much on those thoughts lest I embarked on the road to self-destruction. I called my husband and my parents and told them what had happened. I did not want to spend another minute in that hospital. We made arrangements for me to leave on condition that I would go back the following day and clear with the hospital. So we left.

Leaving was tough. A deep sense of emptiness engulfed me as I left with no baby in my arms. I was lucky to have a good support system especially from my mother-in-law (mum in love) and my husband. My mum in love had herself lost a child in her earlier days and so having her around was just divine. She gave me practical advice on how to deal with loss and how to carry on.

Also Read: “I Lost my Baby at 37 Weeks Pregnant. This is What Happened” -June Muli’s Story

I also resolved to carry on… amidst my personal struggles with God. Eventually, after reading and re-reading the book of Job I somewhat understood the question of suffering and how God is present even in our suffering. I came to understand (and stubbornly so) that in the end there is NOTHING that God allows us to go through or to experience that is not for our good. Ours is to trust Him especially in the difficult times. I also drew a lot of strength from my husband who is not only a man of faith but also a Faith man.

I conceived again! I was overjoyed. I had not entirely healed from the loss of my son, but I was at a better place. We began my ante-natal clinics at eight weeks. We were not going to take chances. We were extra cautious this time. My doctor journeyed with us, ensuring we put measures in place to ensure that our child was carried to term and was safely delivered.

The doctor said that she strongly felt that the reason I had gone into preterm labor was because I had an incompetent cervix.

An incompetent cervix can occur in either of two ways: a short or weak cervix. Either way, the pregnancy cannot be carried to term unsupported. This is because the cervix begins to shorten and open too early during the pregnancy causing either a late miscarriage or pre-term birth.  So what happens to women with an incompetent cervix is that a cervical stitch (cervical cerclage also called a MacDonald stitch) is inserted between 12-14 weeks of pregnancy and removed at 38 weeks. The stitch reinforces the cervix and allows the cervix to remain closed until the pregnancy is term. Once the stitch is removed, most women are able to have a normal and safe delivery. So that’s the precaution we took.

The stitch was inserted at 13 weeks and removed at 38 weeks. Labor came at exactly 40weeks. The insertion is a 30 minutes procedure done under general anesthesia. The stitch is not removed under the same anesthesia, and so it can be done at the doctor’s office or clinic. Both insertion and removal are pretty much painless. And so it was an exciting and very smooth 40 weeks of being pregnant and of a safe delivery.

Also Read: The Stitch in Time that Prevented my Miscarriage: Selina Ojwang’s Story

Our son was born…

It is hard to imagine how such a small person can bring so much joy in our lives.  We are grateful to God. Our son is adorable. There are many things about him my hubby and I like. Like the fact that he has severally peed on me. I heard that boys do that….he loves being bathed and gets excited when he is in water. His father is present in all moments. He is helpful with our son so I am able to work and rest.  I have had 2 live in house helps, it didn’t work out for us. We currently have a day bug and that’s working well. I am not sure if I’ll ever want a live in nanny but again never say never. I thank God for the gift of our son. He is such a blessing. There is nothing like motherhood. It is a vocation that I approach with great humility and prayer.

For mums who have gone through loss, do not give up. Do not stop trying. God in His time will make everything beautiful. Blessings to you all.”-END

So that’s all I had for you today friends. I hope you’ve been inspired by this story. If you have a story you’d like to share with other moms, email me on maryanne@mummytales.com and I’ll be in touch with you.

Otherwise thanks for stopping by my blog. Pass by again next Tuesday 🙂 Remember if you missed last Tuesday’s story about Irene, you can watch her story by clicking on the video below. You can also follow me on Facebook, Twitter and Instagram. 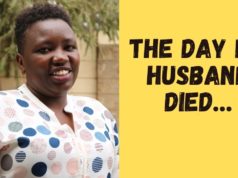 How my Husband Died and Life as a Young African Widow