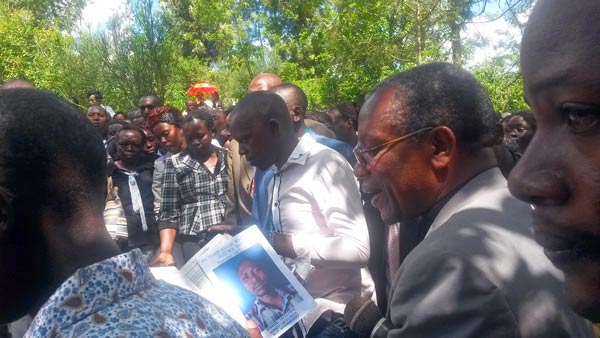 At 7.30pm on Friday 13 November 2015, my cousin Richard Ngugi, a taxi driver in Gatundu town was at work when some clients approached him and asked to be dropped somewhere. He obliged.

The following morning, Saturday, his wife reported that he hadn’t returned home the previous night – which was extremely unusual of him because he would always go back home no matter the hour. Word spread round, and then began the earnest search for him. On that Saturday, our hopes were high that he’d be found somewhere, alive. However, we started becoming really worried when that Saturday afternoon, his taxi was found in a car wash in Nairobi’s Eastlands area. On Sunday, we were completely stressed out, but we still had lots of hope.

By Monday morning, we didn’t want to speak. No one was talking. Just looking at each other and muttering silent prayers. The wait was long and agonizing. Tense. Nerve-wracking, because hard as one tried, somehow one’s thoughts now began shifting to the unthinkable. We all had sweaty palms and I bet sweaty armpits too. But we nevertheless remained hopeful. Sometimes, when all is lost, hope is all you have left.

At 10am Monday, the police called the family about a body that had been found dumped in Murang’a on Saturday, and so if someone could go down there to check if it was that of our Richard.

Richard’s brother went down to Murang’a.

It was Richard’s body.

His head had been bludgeoned, thoroughly, and he’d also been strangled. The item used to strangle him was still around the neck. He had also bled from the nose, mouth and ears. The blood was dry, but it was there. Lots of it. Thick red.

When I received the news on that Monday afternoon, I cried. I cried like a baby. I cried so hard. I couldn’t believe that Richard (we called him Risi) was gone, worse, in such a gruesome manner.

Risi’s mum and my mum are sisters – she being my mum’s immediate follower. I’ve mentioned on this blog a couple of times about my childhood holidays in Gatundu. Almost every holiday, my folks would ship us out of the city and straight into Gatundu. Same thing with Richard and his siblings. Though they lived in Gatundu town – not too far away from my grandparents place, they’d all be dumped there as well :-). They were five of them – four brothers and one sister, while us guys were four – two boys and two girls.

Richard and I were particularly close because we were agemates – he was just three weeks older than I, so I guess we used to operate on the same ‘wavelength’ :). Together, we’d climb the loquat trees (why did we used to call them ‘luguads’ though?), eat unwashed mangoes, green ripe avocados and passion fruits from the farm. We’d also play truant when we were assigned coffee-picking duties (I hated picking coffee beans because I once met a chameleon on the tree I was picking and let out a loud scream. I developed an intense phobia for the coffee trees after that – to date), where we’d go take a dip at River Thiririka which was just down the valley (or rather my brothers and boy cousins used to take a dip – me I just used to follow them and watch from a distance, too scared to jump in). Risi and our cousins would help us out with our very bad Kikuyu while we’d help them with their English. We had so much fun together. Such wonderful memories of Risi I hold dear.

To learn of his painful death was devastating. Excruciating to the heart – the kind of pain that pierces you and you don’t know what painkiller you can swallow just to take it all away. He died on the eve of his 37th birthday. He died that Friday night, the same night he was picked up by ‘clients’.

My heart was heavy for an entire week. Like really really heavy – the kind of heavy that even makes you physically weary. I have dealt with death of a loved one before –through accident or illness, but I have never had to deal with death through murder. How does one find closure, especially when the perpetrators are still unknown, and the reasons for the murder still unknown? It is now about a month and a half since Risi left us, but my heart is still heavy. Especially now during this Christmas week. Because for me, ever since I was a child, Christmas has always been synonymous with Gatundu. I still cry when I think about my dear brother Risi. Too many unanswered questions. My heart bleeds for his young wife and the two little children he left behind. :((

And to my aunt, who was unable to attend the burial since she was recovering from an accident that had happened two months prior, where she’d been hospitalized all through – only to be discharged just three days before Risi’s death. Risi used to take a few hours off work every day to visit his hospitalized mum in Thika town. He is the one who had driven her home on the day she was discharged, and he was really excited about having her back home. He died three days later. Still unable to walk on her own or sit up, she lay in her bed all through Risi’s burial – which was happening at the family farm just next door. She could hear the proceedings at the burial, blaring through the PA system. She didn’t want to see any visitor, didn’t want to speak to anyone, and preferred to keep indoors throughout. I understood.

Her husband – Risi’s father, who had been involved in the same accident as her, was at least able to attend the burial, albeit with much difficulty as his legs too had not healed and he could barely stand or walk, and remained seated throughout the entire funeral. But atleast he attended. I watched him struggle on crutches, take one excruciating step after another – held on each side by relatives, as he made his way to the graveside, and slowly take a handful of soil in his right hand and throw it over his son’s coffin which had been lowered in the grave. It was a painful sight. It was the second time he was doing so. The second time he and my aunt were burying a child. Another son. Their second born son, Samuel, died in a road accident 10 years ago.

We laid Risi to rest on Tuesday 24 November at the family farm in Gatundu. It was also the first time I attended a burial where politicians spoke. Moses Kuria, who is the local MP spoke and ofcourse, Moses who is the usual Moses you know, spoke what he normally speaks. Then there was also Ferdinand Waititu whose mission at Risi’s burial was to confirm to the Gatundu people that he is indeed running for Kiambu governor in 2017, because the incumbent has basically been doing nothing – in his view. Sigh. These politicians –they tire me. But I guess only because we allow them to.

Death through murder is distressing. It becomes difficult to eat, sleep or drink. All you do is just shed tears. It hurts so deep. Even though I don’t cry as much as I used to like before, the dark cloud still hungs heavy. But I do admit that time has made it better. Risi’s death made me empathize with all those who have lost dear ones through similar circumstances. I don’t know how one finds closure. I seriously don’t. If you have the answer, please let me know. If this has happened to you, I pray for God’s peace and comfort upon you. I know you have lots of questions for God, maybe even anger and bitterness towards Him, perhaps even lost faith in Him, but I nevertheless pray for you even as you heal from your loss. And I pray that somehow, you will find forgiveness in your heart, however difficult that may be. Because forgiveness is important.

Fare thee well my brother Risi. Till we meet again. Say hello to Samuel and Guka. Tell guka that we miss the goats (theng’e) he’d slaughter for us every Christmas. Christmas was such a huge feast in shaggz waaah! Also tell Guka that his grandson Kitty is a leftie just like him. By the way that is one other memory I have. When Guka aimed at something, he never missed. Not even once. When playing with us, he’d aim at us with a passion fruit or a loquat. No matter how much you prepared for his aim – and even ducked, the fruit would still hit you smack! How, I don’t know. We always thought he had special powers in that left hand of his. They say lefties have a perfect aim. I believe it.

Have a Merry Christmas friends. 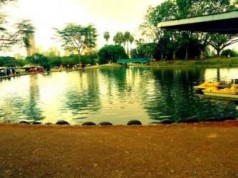 I Want to Row a Boat at Uhuru Park Today