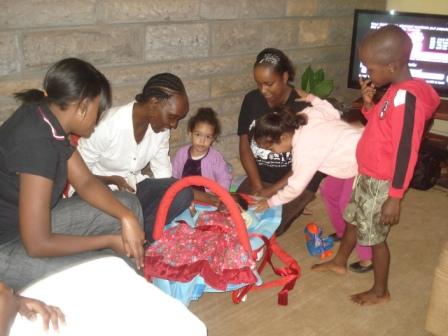 Women in Nairobi continue to intrigue me by how interconnected they are, how information spreads like a wild fire, and where referrals are the order of the day. What I have come to enjoy recently is how networked mothers in Nairobi are.

When I was pregnant, whoever I told I was expecting would immediately, after congratulating me, tell me about this amazing website that I needed to check out asap. The website would give me detailed information about my week-by-week pregnancy development. Baby Center was on the lips of almost every mother I came across. The ladies don’t know each other but somehow, they were also told about the site by mothers before them.

Then as my pregnancy progressed, I wondered where I would shop for my little one’s clothes. So I asked mothers around me. And once again, the chorus from different mothers from different walks of life who do not even know each other were the same.

“If you want good quality clothes, then go to Toi market,” they said, giving me directions to a particular kibanda that sells good quality children’s clothes. These mothers even told me exactly which day and at what time I should be at the kibanda to witness the opening of the bales to allow me select ‘camera’. For those of you who don’t know, Toi market is an open air market in Kibera that sells second hand stuff. And when I went to the market, I was so jazzed. Just like me, there were dozens of pregnant women all eagerly waiting for the bales to be opened. After engaging in small talk with a few of them, I discovered that they, just like me, had been referred to that market by fellow mums.

Moving on, I asked different mothers where I could get more baby stuff such as shawls, towels, a Moses basket and other such like stuff, they all referred to a particular shop on Biashara street. That the street is laden with so many shops selling baby stuff, but there is this one particular shop that seemed to be common on the lips of mums. How all these women seem to have the same responses continued to baffle me. My pal Miss Babes even told me: “Which mother in this town doesn’t know that shop?” and you should have seen her facial expression as she said so. It was a ‘duh!’ expression.

Then, when I delivered, I was advised to take lots of hot liquids, especially porridge. And there went the mothers again saying:

“There is this shop on Kirinyaga road that sells all different varieties of porridge flour. Just tell them you are a breastfeeding mother and they’ll prepare the unga for you…”

Then, there are a couple of women who have referred me to ‘this particular lactation expert’ to help out with any breastmilk/breastfeeding woes I may be having. Four different unrelated ladies have all told me about this woman who teaches new mothers on the basics of breastfeeding, and answers all their questions regarding the issue. They have all given me her number. At first I thought it was different women, but when I looked at the cell phone number they gave, it was for the same lady. I didn’t even know that ‘lactatians’ exist (for that is what she is called), but turns out they do.

Turns out that women in Nairobi are truly networked. Give a good service to one and they’ll be sure to spread the word about your good job. No need to spend thousands in advertizing for they will do it for you. And trust me, they will do a superb job.

But woe unto you if you give a bad service or product. Like I said, word among Nairobi’s women, and in this case Nairobi’s mothers spreads like a wild fire. Let me not start on the hospitals I was told to avoid like the plague if I wanted to have a safe delivery and if my baby and I were to leave the hospital healthy. Or which doctor to avoid. Or the shops that sell bad quality clothes yet cost an arm and a leg.

All the same, I love how networked Nairobi mummies are, and I am glad to have recently joined this network. I have already done my fair share of referrals to many moms-to-be. So any product or service you may need, I will only be too happy to share my opinion or experience and make a referral if necessary.

Have you made a similar observation? See other mum’s comments below.