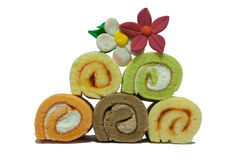 Kitty has been good, and what he has been up to is making me and all those who love him very happy.

I especially love the way he talks. Whenever Kitty wants to tell me something, he chuckles, spreads his arms apart, raises them in the air then kicks his legs all over, but still the poor words cannot come out of his mouth. All he usually manages is prolonged aaaaaaaaaaaaaaaaaa….bbbbbbbuuuuuuuuuu sounds, afterwhich he then looks at me with this expectant look of: “you get wharram saying ma’?”

No Kitty, I don’t get what you say. But I just totally love the way you say it.

Then when he’s bored and just chilling, he usually tells stories to himself. This he does by just going on and on and on and on rumbling and rumbling. In between, he takes pauses to laugh at his own jokes. And when he is beating these stories, he usually gallops. By galloping I mean he kicks his legs in the air in a coordinated rhythm and with supersonic speed. He puts his feet together and begins kicking them in the air at the same time. Like the way a kangaroo hops with its feet together. He does this so fast and with so much vigor as though he were competing in a race, prompting his father to ask him if he’s attempting to give Ezekiel Kemboi compe, and if he will do the Kemboi jig when he’s done galloping/hopping. To which Kitty usually stares at him blankly and with a toothless grin, then chuckles and begins galloping again.

Then, he has since discovered that when he puts his lips together, he can produce sounds by vibrating them. So he usually does the vibrations for hours on end, and the thing with vibrating his lips is that he produces lots of spit –something that he loves very much. The more the spit, the more the vibrations and the more the merrier for him.

Then my boy just loves grabbing at anything and putting everything in his mouth. He eats my clothes, my hands, my hair, everything. Give him anything and it goes direct into his mouth. Now, I love reading newspapers when I get home in the evening, and the other day I was holding him while reading the newspaper and was quite pleased with him because he was silent and just relaxing. Only for me to turn the page and realize he had nibbled the entire half of the newspaper page!

And then, he also loves nibbling on his toes. Kitty looks for any opportunity to get his toes into his mouth. His socks barely last on his feet for more than 5 minutes, for he happily yanks the socks off and before you know it, he has his foot in his mouth. I don’t know for how long this foot-in-mouth business of his will last.

Theeeeeen, Kitty fears darkness! At night, I have to ensure he has slept completely before I switch off the lights. Many are the times he has turned in his sleep and when he instinctively suspects the lights are off, then opens his eyes halfway and discovers that they are indeed off, he lets out the shrillest scream you ever heard and cries endlessly after that, totally refusing to be comforted. Many are the times I have had to sleep with the lights on. I don’t know what he fears about the darkness, because you can’t say that he fears the ghosts that lurk in the dark because he doesn’t even know what a ghost is. If you have any advice on how I can sort out this situation, let me know please.

Then, Kitty’s hair looks rather interesting. It is a half box/half pank/half Mohawk/half Jordan. I understand he is losing his baby hair. But I also think his hair is falling off because of the way he places his head when he sleeps. I am constantly urged to cut his hair but I’m not in a hurry to do so. I think he looks all so handsome and lovely the way he is with his mathogothash hairstyle. I will cut it someday but not now.

But the best part of the day is when I get to play with him in the evening. His best game is when I hide my face in my hands pretending to have disappeared, then suddenly shewing myself to him. This makes him chuckle and laugh so hard till I see the little tongue behind his throat. Sometimes I hide under the bed or behind the door then suddenly reappear, calling out his name in the process. This I do this repeatedly and it excites him so much until his eyes tear with laughter and his lungs ache until he can laugh no more. Oooohhhh, don’t I just love my little boy!

Such moments are priceless, and I thank God everyday for the blessing of motherhood. It’s been a wonderful five months and I give thanks to the Almighty for this experience.

Happy five month birthday Kitty. See you in the evening for our favorite game. 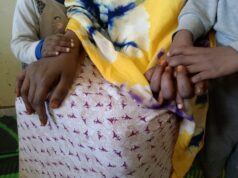 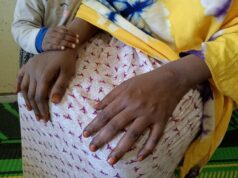 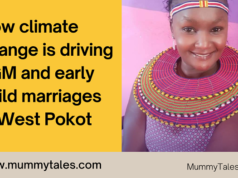