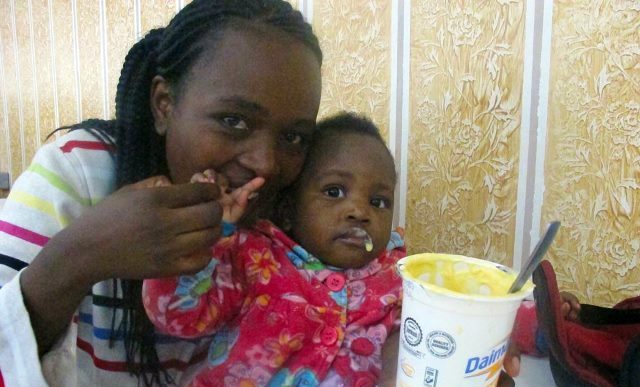 We arrived at the hospital at around 8am. I was in my work clothes. When one of the nurses tested my blood pressure, I noticed the alarm on her face. I had also dilated so there was no turning back. It was not time for me to go to work, but it was time to have my baby delivered, as a matter of urgency. Things progressed quickly after that. I was given medicine to normalize the pressure and then induced to quicken the delivery. I believe this is what saved my life.  Five hours later I welcomed a baby boy weighing 2.25kg. a small but boisterous lovely boy.

After the delivery, I was taken back to my room, but I remember my head was still throbbing in pain. A malaria test also revealed slight parasitic evidence, and I was immediately given anti-malaria tablets.

By 6pm the same day, the headache was really awful and it appeared as though the medical team had no idea what to do. They brought my baby for me to nurse which was quite difficult, considering how I was feeling and the state I was in. Then, just as I placed my newborn on the bed, I convulsed, fell off the bed and went into unconsciousness.

The ‘blacking out’ happened a few more times after that. The first time I found a team of medical personnel whispering around me, with worried looks on their faces. I have never felt so scared in my life. The second time, I woke up in an ambulance. The third time I was being wheeled along a hospital corridor and I can still remember the over-head lights zooming past me. The final time I woke up in maternity ward at Kenyatta National Hospital (KNH) with a drip in my left arm.

Also Read: “I Lost my Baby to Preeclampsia” -Doryce Olough

KNH is where I finally recuperated. They kept close tabs on my blood pressure and kidneys for two days before discharging me. My feet were still awfully swollen and I continued undergoing frequent blood checks for about two weeks after that before the pressure returned to safe levels.

My son and I were lucky. I can’t say I know what caused my eclampsia, but I blamed it on my stressful sales job which I immediately resigned from.

It took another five years before I could confidently go through another pregnancy. Right from when I conceived, I settled for Kenyatta National Hospital because of my history there. I indicated in the records my close shave with post-eclampsia during my first pregnancy. My blood pressure and protein test were always carefully monitored, and this time I was quite alert and never left anything to chance. I would personally insist on checking and verifying the readings together with the nurse. Thankfully, the second pregnancy was uneventful and I thanked God every day. My son was born healthy.

My third pregnancy was okay, the only thing I noted was that my labor took longer. After 12 hours of labor, the nurses started getting worried considering my brush with eclampsia. But just as they were considering taking me for a caesarean section, I gladly welcomed my daughter, praising God that all had gone well. However, I was to be shocked when I went back to the maternity ward.

Out of about ten women in the ward, only two of us had babies in our arms. All the rest -save for one had undergone caesarean sections to save their lives due to preeclampsia complications. Sadly, their babies had not survived. I remember asking one lady who slept next to me what happened…