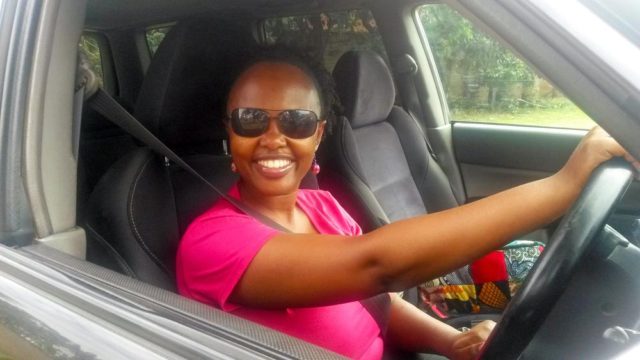 There’s this time, a couple of years back, I was headed to see a pal of mine in Parklands. I drove on Uhuru Highway, then onto Waiyaki Way, then took that road that goes up round a bend that will now lead you to sides of Parklands.

It was those days the roads and routes were pretty new as road expansions were going on, but even though I hadn’t used that route before, I was confident and knew I’d be fine.

So I went. And went. And then suddenly, the road began splitting into different directions and I got confused about the road to take.

Then I started panicking. I was just moving, following the car ahead of me, not sure we were even headed in the same direction.

But I didn’t want to stop because you can’t stop on those roads. If you make a wrong turn, you just have to keep going because 1) all the cars are moving with speed 2) you will be hooted at very badly by the car behind you and the driver will give you a menacing look while overtaking, and 3) there’s nowhere to turn anyway.

So I kept going and after like an eternity of going, I found myself driving somewhere up, then I saw the road that I was actually supposed to be on down below me –and in the opposite direction! Gosh! I’d missed a turn somewhere.

I started hyperventilating and speaking to myself. Where was I going?

Somewhere along the road, I saw a petrol station and decided to get in and ask someone where I was and where I was going. The attendant told me: “hii njia naona ni kama itakufikisha Roiro.”

I have never panicked like that. Me I don’t like finding myself is such situations because I sweat a very cold sweat that makes me feel lightheaded.

Very helpful, the petrol station attendant then drew me directions of how I’d get back onto Uhuru Highway. He really did his best but I’m not good with maps so I got more confused and told him to give me a few minutes to think.

Two minutes later, I got an idea. Someone once told me that when you follow a matatu, you can never get lost because it will at some point go to the CBD.

So I asked the attendant to show me the matatus that were on the same road as I and which were headed to town.

He did, though he told me I’d still have to drive ‘ni kama unaenda Roiro’ before I eventually made a turn somewhere. I said no problem –the matatu will lead me.

So wherever the matatu stopped, I stopped. I stealthily followed it, careful enough not to lose it. And also cautious enough not to catch the attention of the driver lest he thought I was a carjacker. But following a matatu by the way is so much stress because they just stop anywhere and anyhowly. No indicators no nothing. You’re just supposed to read their minds. But at that time, I didn’t mind the recklessness. I just wanted to not go to Roiro.

Finally, I did eventually get to town, before speeding myself back home, happy to be alive and more importantly, not lost.

From that day on, I made a decision. Any time I needed to go to places that needed me to take those new roads and routes, I would not drive, but instead take a cab or use a matatu. I wasn’t going to take any Roiro chances.

So nowadays, I often find myself going out and about with my boys, especially over the weekends, and some of those places are on those new roads, routes and road expansion places.

On those occasions, I happily use a taxi. Specifically Uber. So that I don’t have to go through that drama of lostness –because first of all I can’t even imagine the state I’d be in if I were driving with my kids and then I got lost. I shudder at the thought.

I’ve also found myself using Uber a lot when I have to attend functions that will end late and I don’t want to drive at night, especially with all the new by-passes and diversions that are likely to confuse me.

Then at least with Uber, I don’t have to walk around looking for a parked taxi because from the comfort of where I am, and when I’m ready to leave, I just request for an Uber and within minutes it comes to me. Plus also the fact that Uber is way cheaper than the regular taxis.

So for me, that’s how I largely use Uber. I asked other moms how they use Uber, and one told me that she uses it to do deliveries for her business. She’s in the cake-business so she uses Uber because she’s assured that her cakes get to the client in one piece, which she says is key to her business’s success.

She’d tried other delivery modes before, but many times the cake would get to the client in bad shape, hence why she opted for Uber.

There’s also another mom who uses Uber to pick her kids from school (with the nanny) on those occasions she’s stuck somewhere and she just can’t make it on time to pick them.

Another mom told me that when she goes out for a girl’s night out, she uses an Uber because she doesn’t want to have to deal with issues of driving at night. “It’s a more reliable and safer option,” she told me.

One common statement I noted with the moms is that they choose Uber because of safety concerns; they are able to see their driver’s name, license plate number and make of the vehicle, so they’re able to clearly identify the right car before getting in.

They also know that Uber drivers are well-vetted, and that Uber uses GPS tracking from the start of the journey to the end, so they are on the map all the time and the trip details can be verified.

So those are some of the Uber details I thought to share with you today. How about you? What are some of the reasons for which you use Uber? Feel free to add your comment below.