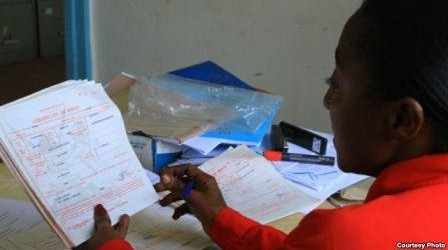 Yesterday, I went to apply for Ello’s birth certificate. He is 5 months old.

I keep seeing many people asking what exactly the process of getting a birth certificate for a child is, and so I am going to chronicle my step by step experiences here so as to give everybody a rough idea of how it goes.

So yesterday, Thursday, I arrived at the registration offices at 12.10 pm. The offices are along Bishops road, directly opposite Social Security House. If you’re taking public means, take those ones that pass through ‘Community’ then alight at the main ‘Community’ bus stop. Then find Bishops road, and walk walk walk along it until you see a KCB signpost – directly opposite Social Security House. You’ll see many people going in and coming out of a certain gate. Get in through that gate – the registration offices are there.

Immediately I got through the main door of the registration offices, I headed to the help desk, which was on my immediate right. There, I found three officers who were helping people with inquiries. I waited for one of them to finish talking to a client, then I asked him where I needed to start with the process.

The very helpful officer asked to see the birth notification first, and after scrutinizing it just a little bit (I think he was verifying its authenticity?), he handed me an application form which I filled out. And by the way always remember to carry a biro with you otherwise you’ll have to spend a few minutes staring at people and twiddling your thumbs as you wait for someone to finish filling out their application form before they can loan you theirs.

After completing the application form, I asked the officer what next, and he told me to take it to counter number 6.

I went to counter number 6 and stood in line. There were about 10 people ahead of me.

As I was waiting for my turn, I began asking myself if copies of my ID and that of baba Ello were needed. I remembered that they were required the last time when I was applying for Kitty’s birth certificate two years ago. Though I had my ID, I didn’t have Baba Ello’s so I decided to ask the officer at the help desk about it because I didn’t want to stand in queue only to be told that the process could not go on until I came back with a copy of his ID.

After asking the officer about this, he told me that my ID copy would suffice. Now all I needed was to look for somewhere to photocopy my ID. Did this mean walking all the way to ‘Community’ and looking for shops that would do this? Oh dear!

Luckily, there is a man who photocopies stuff right outside the main entrance of the registration offices – still within the same compound. Phew!

The man photocopied the ID for me, together with the birth notification slip, then stapled these copies to the application form which I had already filled out. I paid him 15 shillings for this. I guess to save on that time, you can photocopy these two documents prior to going there. 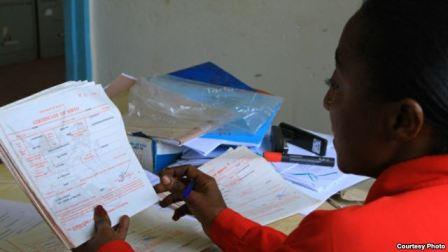 So then I returned to counter number 6. I took my place at the back of the queue. This time there were like five people ahead of me.

The officer keyed in a few details on the computer and marked/wrote a few things on the application form. Then he tore off the lower part of my application form and handed me the slip.

He requested that I come back with it one week later- next week Thursday.

At 12.36pm, I left the building. The whole process – from start to finish had taken me all of 26 minutes. I was happy. Very happy actually. I hadn’t anticipated that it would be that brief.

By the way when I was leaving, I noticed that the doors were closed such that only people who were exiting were being opened for. I asked the security guard why this was so, and he told me that the doors close between 12.30pm – 2pm to allow employees take their lunch break.

Yeah, so that’s part 1 of the process. Very hustle free and smooth. Very clear straightforward steps and helpful officers to guide you. I will return next Thursday and tell you how it goes.

Getting a Birth Certificate in Kenya –Part 2