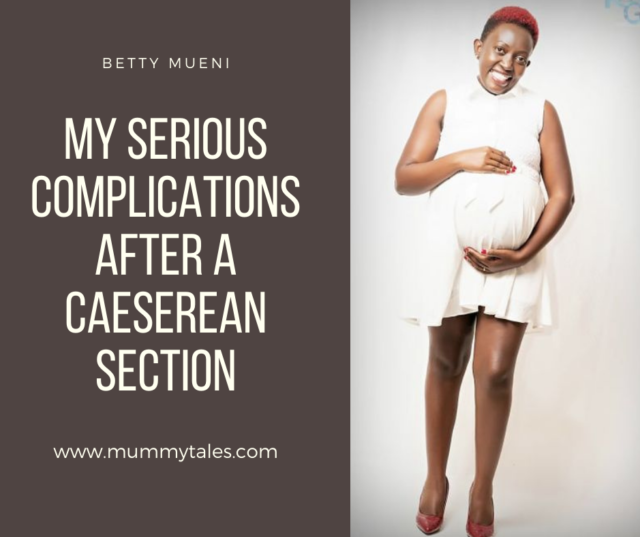 Hello friends and welcome back to Mummy Tales where I share motherhood stories by Kenyan moms. Today, I feature the story of Betty Mueni, a 33 year old mother of two who is currently undergoing the throes of complications from a caeserean section. So what exactly happened? This is Betty’s story, in her own words.

“My second pregnancy was easier than my first, save for a few issues here and there to do with gestational diabetes and a high BP which were managed well.

Having had delivered my firstborn daughter vaginally, I was 100% sure that I would delivery my second child vaginally as well.

On 10th August 2020, I went for my last check up. I was 41 weeks pregnant. My BP had been a little bit high in my last visit and with my history of gestational diabetes, the doctor booked me for induction early the following morning at 6am.

On 11th August 2020 at 6am, I was booked in and given my first set of medication. By 2pm, I had still not started experiencing any pain. However, the foetal heartrate monitoring machines noted that my baby’s heart rate was not normal.

At 7pm, while waiting for the second set of medication, the doctor came in with some not-so-good news. My baby needed to be removed immediately. In less than five minutes, I gave my consent for a procedure that I was completely unprepared for. I was so scared!

I was quickly wheeled to the theatre and in no time, my baby was delivered. He cried normally, was received by the Paediatrician, and I saw him before he was taken away.

Then it was time to close my tummy.

I however sensed that something was not right because the doctor kept on complaining about something I could not understand. It is only later on I learned that my platelets were low, that my blood was not clotting, that’s why he was having a hard time closing up my tummy. All in all, they finished with me and I was discharged after three days.

Two weeks later when I went for my appointment with my gynaecologist, I mentioned that I was feeling like there was something hard and painful in my tummy. The gynaecologist examined me and referred me for a pelvic scan. Since it was already late, she instructed me to send the results via WhatsApp.

As I was doing the pelvic scan, the look on the face of the radiologist told me that all was not well. I was later to be informed that I had a haematoma (accumulated blood somewhere in tummy muscles) of about 517 ml. I sent the results to my gynaecologist as instructed and went home.

On reaching home at around 8pm, she called me and told me that I needed to go back to hospital, that she had already spoken to the gynae on call about my case. She mentioned about the possibility of me going back to the theatre.

I obeyed her instructions and rushed to hospital, while crying very much. At the hospital, the gynae on call sent me to the general doctor who prescribed some medication, saying that the clot would clear. He asked me to return after seven days for review.

When I spoke to my gyanaecologist, she advised me to go home and return after seven days as advised, but from her tone, I sensed that she was not very much at ease about it.

Seven days later (now three weeks post-partum), I returned to hospital for review where I was told that the clot had reduced to 350 ml. This was still a lot and very risky for me.

After discussing with the gynae, she referred me to an interventional radiologist, who would help drain the blood clot without me having to go to theater. This was yet another complicated procedure that involved drilling some tubes through my tummy, guided by an ultrasound machine, while the draining of the blood continued through tubes. I stayed with the tubes for two weeks at home, which were draining the blood. I managed to drain 260ml.

When I returned to hospital, a scan showed that the clot was now remaining 40ml. The doctor said that this would be absorbed by the body. The tubes were removed and I was relieved that my troubles were over and I could concentrate on my baby. I even started taking a 20-minute evening walk.

But trouble was yet to strike again when I started feeling intense pain in my tummy. A trip to the hospital and a scan showed that I had another hematoma, which now had pus of about 25ml around the CS wound. My tummy was hurting so much, I’ve never felt that kind of pain before.

Barely two hours later, I start actively bleeding from the wound! This had to be addressed immediately to prevent excessive blood loss. This was yet another very painful and teary ordeal. That went well, thankfully.

As I share this story, I have an open wound around the part of the CS incision. I go for wound dressing everyday for up to two weeks when the wound will be closed.

I hope, trust and believe that this will be the end of these complications. It has really been a bumpy road – not forgetting the challenges of a newborn – colic, the cries and a flu in in between. How I have made it this far is only God. But I still have my smile on and I’ve learnt to live one day at a time.”

And that is Betty’s story. We pray for her complete healing and recovery. Do you have a personal story about how you got through a hard time or overcame an obstacle? Email me on maryanne@mummytales.com

You may also like to see Mary’s inspiring story below:

Mummy Tales is a blog that contains lots of helpful articles that will help you navigate your motherhood journey. Feel free to search the blog for other experiences of Kenyan moms that may teach you a thing or two. You can also follow me on Facebook, You Tube, Twitter and Instagram. 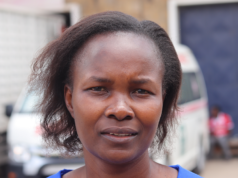