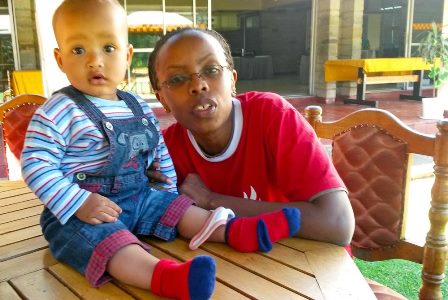 Thankfully, my husband was supportive and would babysit at night so that I could rest. He also encouraged me to start expressing breast milk so that I could leave the baby with the nanny and get out of the house for a short periods of time. Believe me, those little outings made the first few months bearable.

As baby grew, I realized I had to start stocking the fridge with breast milk as I was returning to work soon.  Unfortunately, I was only able to express very little as I was not eating well and neither was I getting enough rest. Thankfully, I was a member of a Kenyan Breastfeeding Support group on Facebook, and from there I got lots of ideas on how to increase milk production. From the group, I got tips that led me to:

By the time baby was four months old, I had quite a bit of milk stocked in the fridge. That is also the time I also had to return to work, which surprisingly caught me off-guard! I had no pump, and I worked 50km away from home. I had no office at school, as I was a part-time employee. How was I going to express during the day?

Also Read: “Expressing Breast Milk at Work: What Worked for Me” -Iddah Membo-Onyango

I decided to figure out the storage aspect first. I bought zip lock bags and put water in them, froze them and used them as ice packs. I had also bought a cooler bag and I had a few bottles. So storing the expressed milk when I was at work was not going to be a problem. What I had to figure out was where exactly I would be expressing the milk. I decided to get creative.