Once home, the couple would watch over their daughter, with Susan managing to exclusively breastfeed her for the first six months. However, during a routine well-baby clinic at six months, the nurses expressed some concern about Princess’s health.

“They told me she was not achieving her required developmental milestones. At six months, her head was still floppy as her neck was unable to support it. She was also unable to sit up and showed no interest in attempting to crawl. They also asked me if I had noticed that she was not responding to any sounds,” remembers Susan.

The nurses advised a hearing test.

“The tests confirmed that Princess had profound deafness. Further testes also revealed that she was suffering from cerebral palsy,” remembers Patrick.

A second opinion confirmed the same diagnosis. According to doctors, the severe jaundice Princess had suffered could have caused permanent brain damage. The news hit Patrick hard.

“She was my first born, and raising a disabled child is not something I had ever imagined. I was certainly not prepared for it,” remembers Patrick.

He talks of the feelings he had when he discovered his daughter would need special care for the rest of her life.

“I felt a tinge of disappointment because I knew she would not be the independent, successful woman I had envisioned. I even wondered whether she would survive childhood in the first place, and worried about the huge responsibility that lay ahead, wondering if I would be able to pull through.”

Despite these fears, what he knew for certain is that he would always be there for his daughter. The first step he took was take her for occupational therapy at Kenyatta National Hospital.

But Patrick would soon be faced with what must be every man’s worst nightmare – losing his job. Princess was just a year old then.

“It became difficult for us to get by. My wife was a stay-at-home mom since taking care of Princess was too demanding, and we had been unable to get a house help since they were asking for too much, due to our daughter’s condition.

Exploring all options, Patrick came across a hospital in Mombasa that offered free occupational therapy for children with various disabilities, including cerebral palsy.

“My daughter had stopped going for therapy at KNH because I could not afford the related costs and was yet to get a job, I took the risk of moving my family to Mombasa,”

Patrick then rented a single room close to the hospital, and while his wife and daughter spent the day in hospital, he hawked tissue paper around town.

Soon after their arrival in Mombasa however, Susan fell ill with malaria and was admitted in hospital.

“Those two weeks were tough – I would cook for Princess, feed her, bath her, and take her for therapy. At the same time, I would prepare breakfast, lunch and dinner for Susan then take them to her in the hospital.

At about 6pm, I would go to hawk my tissue paper, leaving Princess under the care of a kind neighbour – I would return home at about 9pm.”

But just like her mother, the Coastal weather did not seem to favour Princess, for she also got malaria soon after and was admitted in hospital for two weeks.

But even after being discharged, she would constantly get sick, forcing Patrick to rethink his decision about settling there.

“After a thorough analysis, I realised that all the profit I was making was going into Princess’s medical bills. After staying in Mombasa for a year-and-a-half, I decided to move my family back to Nairobi, and rented a single room in Dandora, since that is what I could afford.” 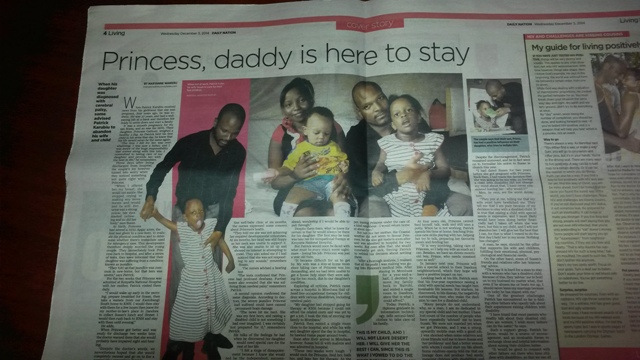 At four years old, Princess cannot feed herself, talk, walk and still uses a potty. When he is not working, Patrick spends his time at home, teaching Princess new skills playing with her, helping her try to talk, preparing her favourite meals and feeding her.

“It is very involving, taking care of Princess, so I help my wife as much as I can. Besides, we have an eleven-month-old boy, Prince, who needs constant care as well.”

Looking back at his life, Patrick says that his four-year experience raising a child with special needs has taught him invaluable life lessons. For starters, he discovered, to his dismay, the negativity surrounding men who make the decision to care for a disabled child.

“Many people do not understand why, as a man, I am so dedicated to my special child and her mother. I have lost count of the number of people who have repeatedly ‘advised’ me to leave Susan. We were not married yet when we got Princess, and I was a young, upwardly mobile man with a good job. I was shocked when some relatives and close friends told me to leave Susan and ‘her problems’ and find a better woman with whom I could start my life afresh.