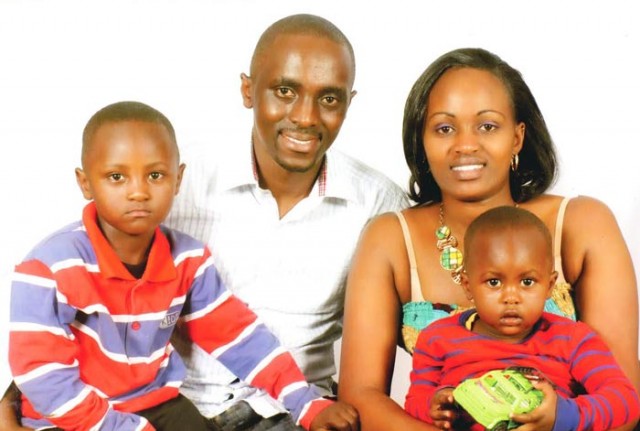 Last we heard from 29 year-old Robert, he was telling us about the excitement he had on the first day he became a father, and how he jumped all over as though he’d won the lottery, to how he prepared porridge for his wife and took it to her in hospital (how sweet!). You can catch up with Robert’s article here: Remembering the Day I Became a Father for the First Time.

Robert is married to Lucy Wambui. The couple are born-again Christians and have been married for 7 years. They have been blessed with two sons: Arthur aged 6 years and Fabrice, aged 3 years.

Today, Robert narrates an incident regarding his first son -who was then just a year and a half old -an incident that shook Robert to the core. It is every parent’s worst nightmare.

This is Robert’s story.

“I remember that day vividly. I had taken my son Arthur to visit his grandmother not too far from where we lived at that time. We had left his mother behind since she wasn’t feeling well. As Arthur was playing outside, he accidentally fell into a bucket full of soapy water. There were some children playing nearby and who, upon seeing what had happened to Arthur, started laughing and shouting ‘toto ameanguka kwa maji’. They were innocent and had no idea of the ramifications of what had just happened.

However, my father and I heard their shouts and we quickly dashed outside. What I felt when I saw Arthur I cannot describe in words. Arthur had fallen head first inside the bucket full of soapy water. His legs were up in the air.

We quickly pulled him out and laid him on a table that was nearby, then we tried to resuscitate him. Unfortunately, the little boy was unresponsive. There was no sign of life in him. So I grabbed him and made a mad dash for the road where we took the first matatu that came by. I thank God it was a good driver who, upon learning what had happened, hit the accelerator so hard and didn’t stop anywhere to pick or drop passengers until he had safely delivered us at the hospital. All this time, my son was unconscious.