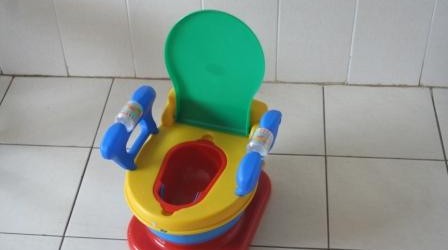 When Kitty turned 1.6 years in October last year, I decided it was time he learnt how to use the potty. So what I did was to instruct and show him how to use it. But how he understood it was that the potty was a dismountable toy – precisely a toy car. He would not sit on it, but instead dismantle the parts and begin driving them around the house. I tried a few other times, but from his behavior and attitude towards the potty, I decided he was not ready yet. So I put the potty away. 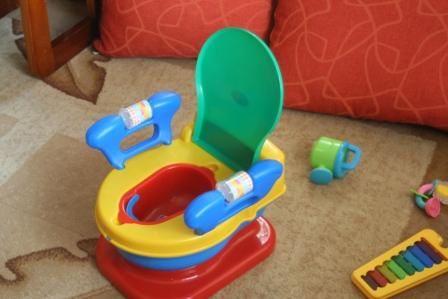 In December, when he turned 1.8 years, I decided to give it another try. Of course I always involve Auntie in the potty-training business since she spends the better part of the day with him. This time, Kitty had shown remarkable improvement because he was no longer transforming the potty into a toy car

. This time, he did actually sit in the potty and occasionally, peed in it. Unfortunately, this only happened when he was with Auntie. And it still happens today. What happens is when I am around, the boy refuses to sit in the potty and instead prefers to run around uncovered, excitedly hollering all over. But when I disappear, he goes back to the potty and sits pretty and does his business. I just don’t get it. Thing is at the moment I’m not working and spend most of my day at home so it’s kinda hard to keep disappearing, and so we’ve had many incidents of accidents happening around the house because when he is busy running around, he is busy peeing everywhere too!

Then, getting him to do number 2 is even the bigger problem. Now, I have carefully studied Kitty’s bowel movements and I know when it’s time for him to do number 2. One of these times is a few minutes after he’s had his breakfast. So right after breakfast, we get him to sit in the potty as he watches Bananas in Pyjamas and the Ha Ha Hairies – cartoons which he loves. But a looooooong wait later, the boy still hasn’t pooped. So we continue to lay in wait. One hour later, he still hasn’t pooped. So we give up. But immediately we dress him in a diaper, he poops instantly! And on days when we don’t put him in the potty after he’s had his breakfast, he poops almost soon after. But pooping in the potty? No way. I just don’t get it. Is he able to psychologically control his bowel movements or what? Is he able to mentally retain the poop until he is in a diaper? Is that possible from a 1.9 year old? Because I tell you, the cows will come home as you wait for him to poop in the potty. He will just not do it. 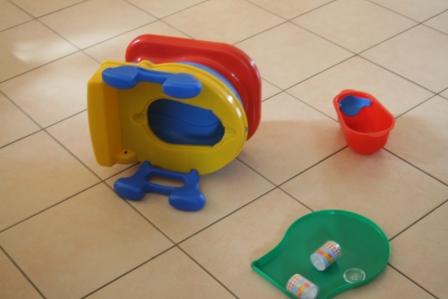 So what happens on the days we decide to stay put and not to dress him in a diaper until he poops? Two things: we dress him in trainer pants, and he has no problem pooping in these. Secondly, we let him walk around and let him know that when he feels like the poop is ready to come out, he should quickly rush to the potty and do his business there. Problem with this is that when he feels the poop has come down and is knocking on the door, he does not go to the potty, but instead walks over to an alienated place in the room. Then poops there. It’s happened three times now. The first time it happened, I was shocked beyond words as I stared at the floor. Then I was very amused. I think for now, Kitty just has an aversion to pooping INSIDE the potty.

And yes, Santina had mentioned patience when she narrated her experiences potty training her little boy here. So I’m being patient, I know he’ll do it right someday. It’s not worrying me as such. Meanwhile, I’ll keep twiddling my thumbs as I wait for that day.

And you? What’s been your potty training experience? 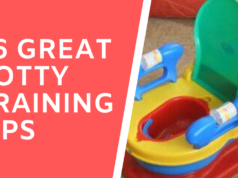 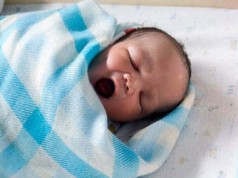 These People who Don’t Make Your Time Easier When You’re a New Mum! 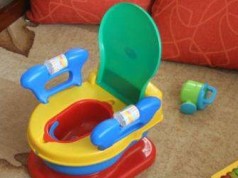