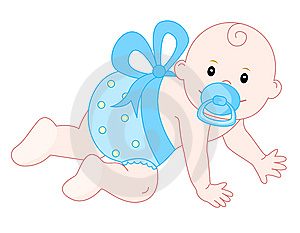 And I’ve been encouraging him to crawl, and how we do it is that I place a toy in front of him and then urge him to come for it. So he usually crawls towards the toy, moving, moving, moving and steadily inching closer to the toy, his hands and legs coordinating in rhythm as he reaches out for the toy. All this time, his face is always contoured with such determination that makes me so proud of him.

But there’s a slight hitch though.

All the movement he makes towards the toy is all in his mind for he remains fixated on the same spot. He never makes it to the toy, not even close, for he never manages to move even a centimeter. Finally frustrated and exhausted, he usually just releases his body and plops himself onto the bed -stomach flat. My poor little boy.  It nevertheless makes me smile when this happens because I know that soon, he’ll move, even if it’s half a centimeter.

Well, I spoke too soon for he did move a couple of days ago. And here is how it went:

As usual, I placed a toy in front of him. He was on one side of the bed and I was at the other end, waiting for him to come towards me. Naturally, he set himself into position by going on all fours, then began doing the ‘on your marks’ pose. He likes warming up when in the ‘get set’ position and he does so by rocking himself back and forth as he prepares to launch. Then the ‘go’ moment came, his facial expression the
definition of pure determination, his eyes focused on the toy which I kept flashing before him whilst calling out ‘Kitty Kitty Kitty….

He then inhaled deeply, before mustering all the energy in his little body and whoooaaaaaa – he crawled! Yaaaay, my boy crawled! *clap hands*.

But my celebration was soon cut short as the excitement soon turned into shock horror for me. Kitty was crawling alright, and as I was waiting for him to come towards me, it suddenly occurred to me that he was moving away from me -and fast! It couldn’t be, I must have been dreaming. It at that very moment dawned on me that Kitty was crawling backward! Ala! How now?

I had to jump into quick action because remember he is on the bed and the more he crawls backward, the more he’ll soon land on the floor –face down. Dear me!

So I acted fast.

What I did is that I leaped into the air like the true ninja that I am and jumped across to the other side of the bed –just in time to catch his fall. I arrived in the nick of time to rescue my little boy from falling down, as his legs were already dangling in the air ready to drop his body down. My arms were there to cushion his fall, and after he was safely in my arms, we both stared into each other’s eyes, stars glittering all around us, our hearts beating fast and melting into each other’s love.

Okay fine fine fine you’ve caught me there -I might have exaggerated a little bit there but it happened almost like that.

After that episode, I held him tight all day long and didn’t let him go because that had been quite a scare. He was done crawling for the day.

That happened last weekend, and since then I’ve gotten used to the backward crawls because I’ve come to learn that it’s nothing out of the normal. While some kids begin crawling forwards, others like Kitty begin with a backward crawl. So I still continue placing the toy before him, and then watch in amusement as he, with every intention of grabbing it reaches out but only ends up moving farther away from it because
of his backward crawl. And it’s actually funny because he loves it so much and both he and I end up giggling so much about it. We’ll keep the giggles going until the day he’ll move forward. 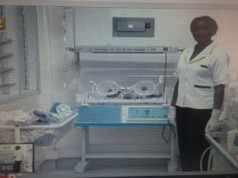