It has just occurred to me that I am obsessed with Kitty’s bowel movement products. Especially now that he has just gotten off exclusive breastfeeding and is being weaned. Ohhh, how I love his poop!

Why do I say so? Because immediately I get home in the evening after work, what is the first thing I ask Auntie?

I ask her whether Kitty pooped during the day. And when she tells me he pooped, I immediately embark on doing a couple of somersaults in the air –exactly the way footballers do them after they score a goal. 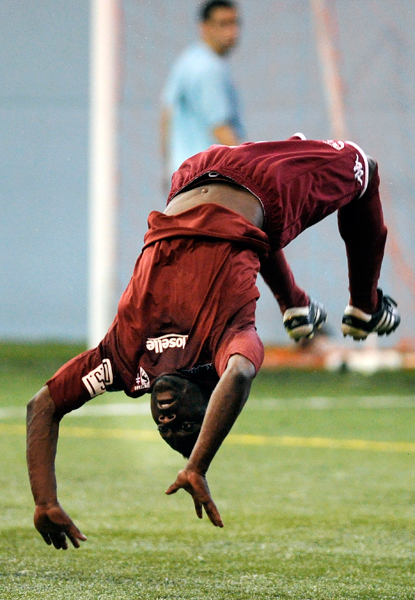 Okay I do mental somersaults.

And then I ask Auntie to give me more details about the poop.

What color was it? What was its texture? Paste-like? Smooth? Hard? Was it a lot, medium or small in quantity? Did it smell lots? Did he poop more than once? Did he have any facial expressions while he was pooping? Was he making any sounds? What time did he poop? Was it released all at once or did it come slowly slowly or did it come in bouts?

In addition, the following behaviours have got me all thinking that maybe I seriously just might be obsessed with Kitty’s poop:

–          There was a time he had not pooped for five days and when he did, I immediately called his father who was at work to inform him of the good news. Despite his father being in a meeting and trying his level best to talk in a hushed tone and in monosyllables, obviously hinting at me that we could carry on the conversation later, I ignored his hints and excitedly kept going on and on about how wonderful it was that Kitty had pooped, and that his poop had been delivered in explosions. And I was speaking rather animatedly, and loudly. He later on told me that people in the meeting could hear what I was saying. Ooohhhh well.

–          Last Sunday, he was on the road from Nakuru when Kitty pooped three times within the hour. My excitement was just out of this world! Why? Because he hadn’t pooped for two days and this is the best gift I could have received on an easy Sunday morning (thank you Kitty).

And naturally, I had to tell his father of this wonderful development so I texted him, describing the poop to him in detail –in a very loooong SMS!

–          Nowadays each time Kitty farts –the ones that really smell, I with urgency stop all I’m doing and hurriedly begin peeping into his diaper –hoping to see the coveted poop. And I get very disappointed when I don’t see any.

–          Nowadays each time I speak to my mwarikhwa (or muiru or sister-in-law if you like), we spend a good amount of airtime discussing Kitty’s poop. Mwarikhwa, who has two lovely daughters has been helping me lots with my experience as a new mom, and most recently guiding me with the weaning process. We talk about what foods make him poop and which ones don’t. I must confess that each time I see her calling me, I start getting excited because among the many other things we’re gonna discuss, poop will be one of the top ranking ones. Yaaaay! Later on today I’ll call mwarikwha to discuss how her day at work was (in disguise because I want to update her about Kitty’s latest bowel movements).

And that’s why I’m beginning to observe myself and taking note that I’m becoming a fanatic of Kitty’s poop.

So tell me, is there something wrong with me or am I just another normal mom who is obsessed with her baby’s poop?