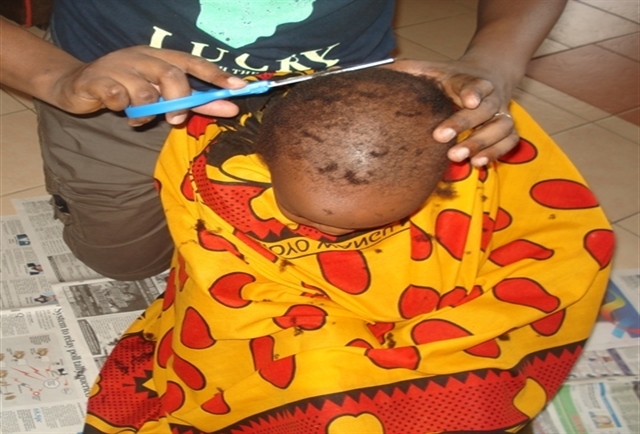 Since I have two boys, today I want to answer a question that I’ve been asked many a time by moms of boys, and it has to do with my boys’ hair. I usually get asked: “So where do you have your boys shaved? Which kinyozi? How much is a hair cut?”

Well, let me start off by saying that my boys have never been shaved in a kinyozi. Their trusted and reliable regular kinyozi is their father. They have always been shaved at home, in a white plastic chair wrapped in a colored yellow and red lesso with newspapers strewn on the floor to collect the hair droppings.

Main reason being I have this phobia for taking my boys to a commercial kinyozi -just yet. Not now. Maybe when they are older. For now, they will do with daddy’s hair cuts at home.

Initially, Baba Kitty used a pair of scissors to cut their hair. Surprisingly, he used to do it quite well because I used to think that the scissors would leave their hairs all rough and edgy, but that wasn’t the case. However, while the scissors’ results didn’t have that fine smooth finish like of a kinyozi, the boys’ heads were nevertheless left clean shaven –and not untidy. 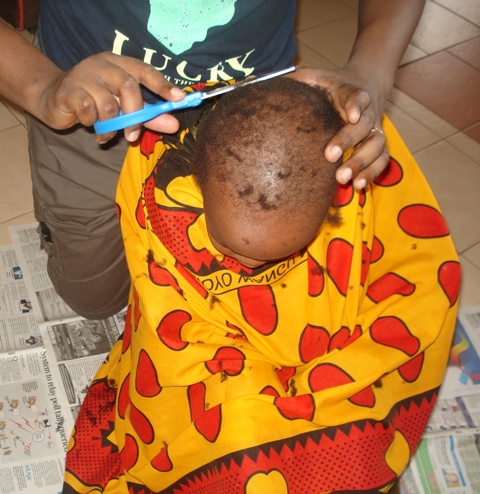 At least it wasn’t me shaving them with a pair of scissors because I think the it requires a certain technique which I obviously lack and I’m pretty sure my boys’ heads would have been left with uneven patches of hair that would have made them look like they have bumps on their heads.

So about a year ago, Baba Kitty upgraded their ‘shaving equipment’ from scissors to a shaving machine. The machine definitely gives them a finer finish than what the scissors used to do.

Interestingly, for some reason, I like watching my boys being shaved. I just like seeing them sitting there obediently as they get the shaved.

As I watch them, my mind always goes back to my childhood days when I would accompany my two brothers for a hair cut when they used to be taken by my mom to the local barber. 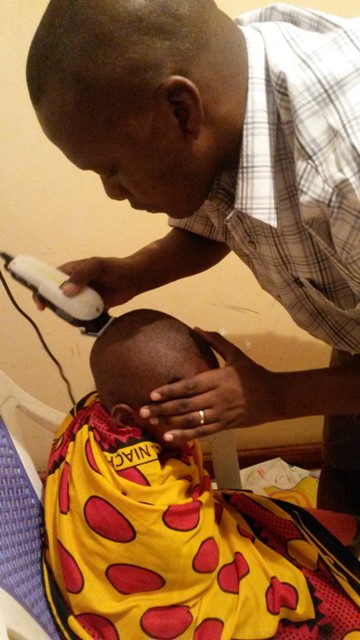 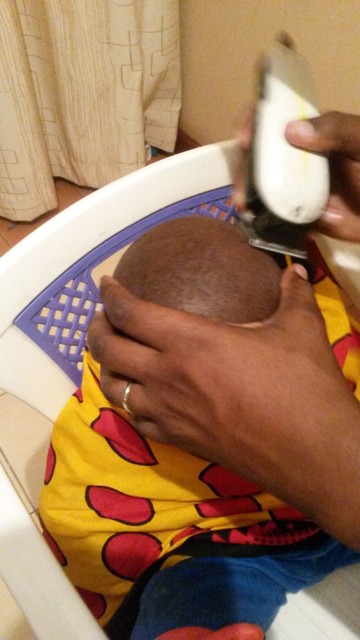 I used to like going with my brothers specifically because there is this nice cologne that they used to be applied on their heads (which I used to plead with the barber to apply on my head too –thank God my mom used to let that one pass).

I also used to like seeing them get dusted off with a fly whisk and I used to ask the barber to do the fly whisk thing on my head too (thank God my mom used to let that one pass as well). I would then leave the kinyozi very happy with myself at the experience, all smelling some nice cologne on my ‘makamatano’ lines 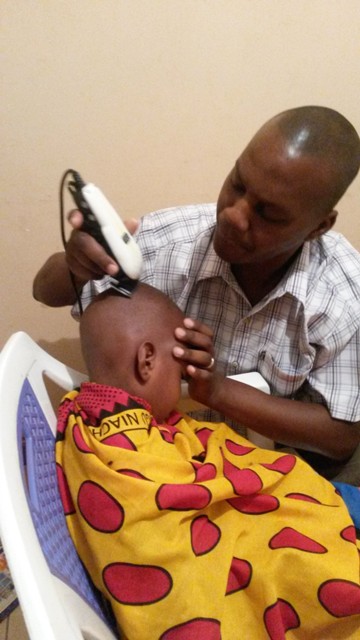 So that’s how the shaving with my boys goes. Ofcourse, their father cannot be their barber forever. But for now, when they are still this young, the home kinyozi will do. No argument about that.

I’ve talked to other moms of boys about the shaving experiences, and they are different. There are those who don’t mind taking their boys to kinyozi’s –as long as they are there to ensure that the kinyozi is clean and that the shaving equipment is thoroughly sterilized as they watch. Then there are those who buy their own shavers and spirit then take them with them to the barber, who only charges them labor.

So for moms who have sons, what do you prefer to do? Is your boy shaved at home or at a kinyozi?  In my local neighborhood salon they charge Sh 100, though there’s a friend of mine who told me she takes her sons to a barber where a hair cut is Sh 750. *gasp*. And you? How much do you pay for your boy’s haircut? 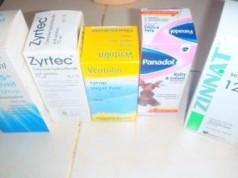 Ever Since Kitty Started School, Things Have Never Been the Same Again