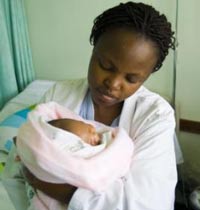 So we were chilling the other day in the sitting room – me, Kitty and his dad – each minding their own business when an airplane passed over our heads (house), and Kitty began jumping up and down shouting “ayplane ayplane ayplane’ as he pointed up above.

I was mesmerized. Totally awed as I grinned from ear to ear. My heart fluttered with joy. I had to say something. And I said something to Baba Kitty:

Me: Eehh! babes, are you seeing how sharp our kid is? Yaani he’s able to recognize an aeroplane and call it rightly so? He even knows it’s up in the air!

Me: I tell you this kid of ours is a genius. I have noticed that he picks things very easily.

Me: Like when you show him the picture of a dog or when he sees one on TV, he starts saying ‘woof woof woof’.

Or when he hears the sound of the train passing by, he begins shouting ‘tain tain tain’ as he rushes to the window to wave at it as he watches it slither by. Si that’s a genius right there?

Him: It’s interesting how all parents think their kids are the cleverest ….

Me: But babes me I’m not like those other parents, mine is genuine. This boy is bright I tell you. I just know it. I feel it in my heart.

But now I was getting a little frustrated because I was seeing like Baba Kitty was not understanding me, and so I decided to practically show him the brilliance of our son. I asked him to watch and listen as I beckoned Kitty.

Me: Kitty, what is this?

Me: And this one?

Now that’s my boy (patting him on the head). Thank you Kitty, you’re a good boy.

Me to Baba Kitty: Si now you’ve seen the way he’s sharp? I tell you, we’re raising a genius.

Him: Babes you have jokes…..