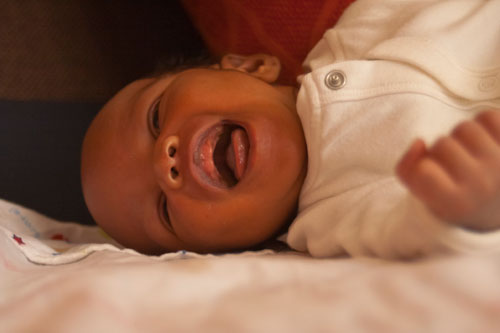 Being a first time mum, I display lots of eagerness in almost everything I do that concerns the baby. I’m a stricter for detail and I follow rules to the letter. I will give you an example.

As I left the hospital, the nurses were very clear, and did not stop emphasizing on how often I should feed my newborn.

“Feed him every three hours without fail. Even if he is asleep, wake him up and feed him,” they chanted over and over again.

My Lamaze instructor had also told me the same thing.

“Feed him at least every three hours. Don’t let it go beyond that,” she said.

And being the obedient new mommy that I am, I did exactly that. But not for long. Turns out that Kitty feeds whenever he feels like, and not when the clock and/or I tell him to. In the early days, I would stare at the clock waiting for it to strike the three hour prime, then quickly wake Kitty up for his feed. But Kitty is another one (translated directly from mother tongue). He would hear nothing of me waking him up and would continue sleeping for another hour or two, totally ignoring my desperate pleas. This completely frustrated me as I thought my son would have stunted growth because he was not feeding as regularly as he ought to have.

Then as days went by and he began getting colicky on an on-off basis, I figured it was in both our best interests if I never woke him up from his sleep because we didn’t know when the next sleep session would happen. So I let him sleep for as long as he wanted, and when he would wake up, I would unleash my boob on him pap! even before he knew what was going on.

I have also noticed that Kitty’s feeding habits are quite interesting. At times he will feed to capacity and when I am absolutely certain he can go for two or three hours without needing a feed, he demands nyonyo barely half an hour later. Other times he will go for extended hours without wanting to feed, worrying me to death thinking he is starving. Other times he will chew on his mittens and on my blouse, all signs that he is hungry, but when I offer him the breast, he refuses and instead continues chewing on the mittens.

Clearly, Kitty didn’t receive the three-hour feeding schedule memo. So how he and I operate nowadays is that I feed him on demand. I am on ‘breast-call’ for him 24 hours. Since he knows his body better than I do, when his stomach says it needs a feed, whether it is twenty minutes or four hours since his last feed, the best I can do is comply with his demands. Which I happily do:-). And since his weight gain so far is good, then I guess we will continue doing the ‘on-demand’ thing. 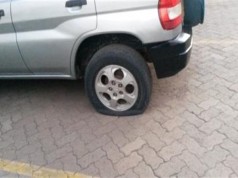 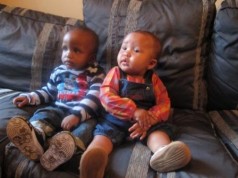 Kitty and Zoe: The Day They Met for the First Time